Belonging to a group that studies lessons has it's advantages. At least once a semester we work on a lesson for my class. In our pre-planning meeting I brought a few ideas of lessons that I really wanted to lesson study to see where we could take them. I proposed Barbie bungee, cup rolls, factoring and expanding quadratics and ....

These all got shut down as everyone said I already do these lessons and they wanted something fresh.

We came up with a ball roll race. This lesson was designed for grade 10 applied math in Ontario. Here is how it went down.

Day 1
Students spent some time white boarding some questions that reviewed similar triangles, sum of squares (Pythagorean theorem) and right angled trigonometry. In the last forty minutes of the class I created visible random groups (5 groups of three students) and gave the groups a piece of wood (all 5 groups had different lengths ) that they were to physically create into a three degree ramp. At my school we have a hallway that is inclined at 3 degrees for well over 11 meters-this would be where the ball roll race would occur.

Once groups started to create their ramps they immediately said "I guess we need to know the length of our ramp." Groups asked for measuring tools which I provided. They also asked for books to build up one end of their ramp. Once they felt they had it I came and measured the angle of their ramp with the blackboard protractor. (Really wish I had taken some photos of this. Groups either went back to the drawing board or they had a three degree ramp) Groups then put their ramps and the books they would need for the next day to rebuild their ramps in the corner of the room. Here is some of the whiteboard work the groups did to figure out height needed for the ramp to be 3 degrees. This part went well-some groups needed to adjust the heights as they just went to the top of the books not the top of the piece of wood.


Day 2
To start I asked all students to guess too low, too high, and best guess for each of the balls to roll down the 11 meter ramp. Here is a sample. 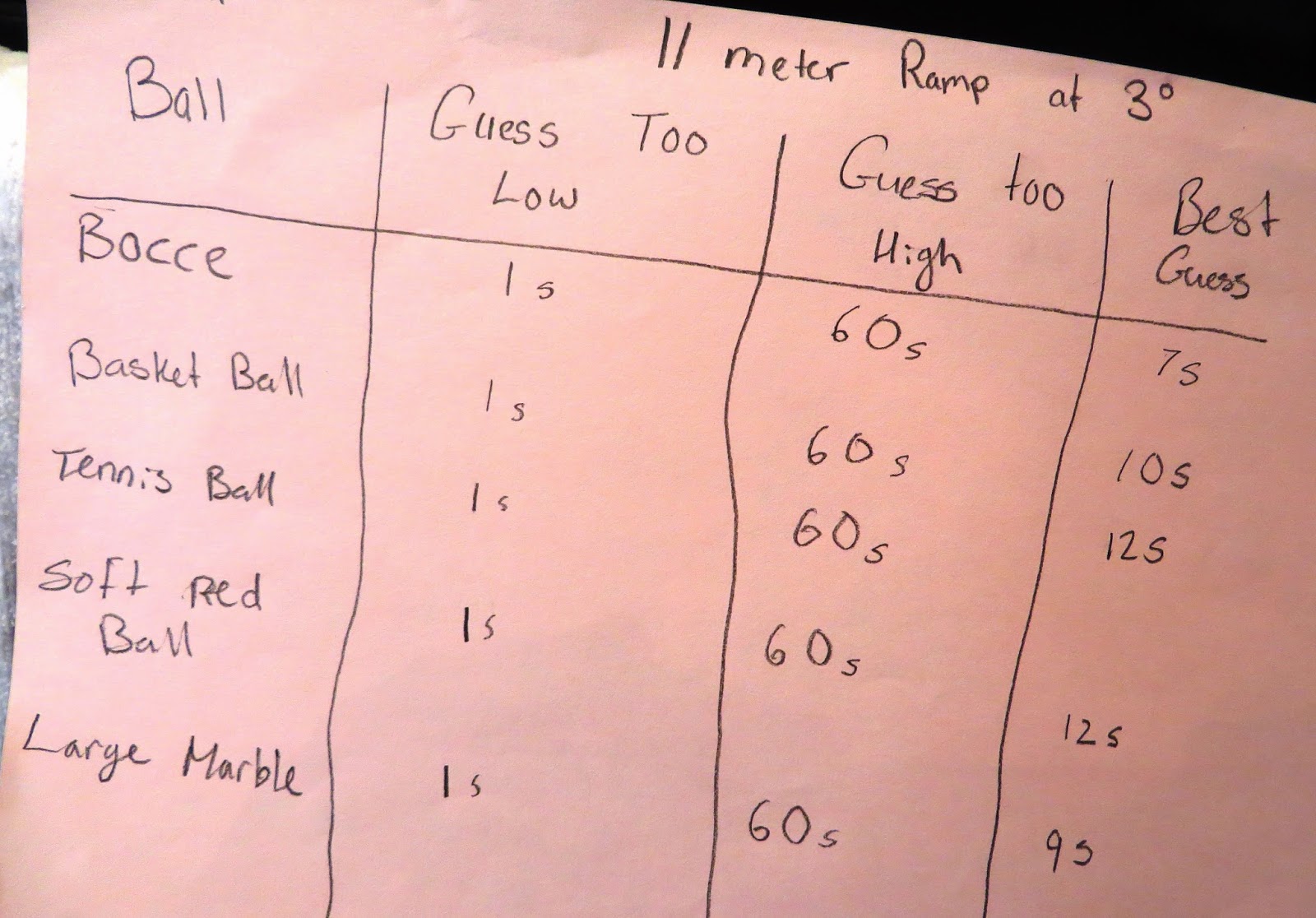 ﻿
Students collected data for time and distance for each of the five balls. The five balls were a basketball, a red dodge ball, a large marble, a bocci ball and a tennis ball . Here they are.

I anticipated a problem here. I felt that if we were fixing the distances and asking the students to measure the times we would be looking for trouble. Since we are measuring time it would be dependent and distance would be independent and we wanted this reversed for a quadratic relation.
So....I decided to create the data collection sheet for them. Here is what I came up with. 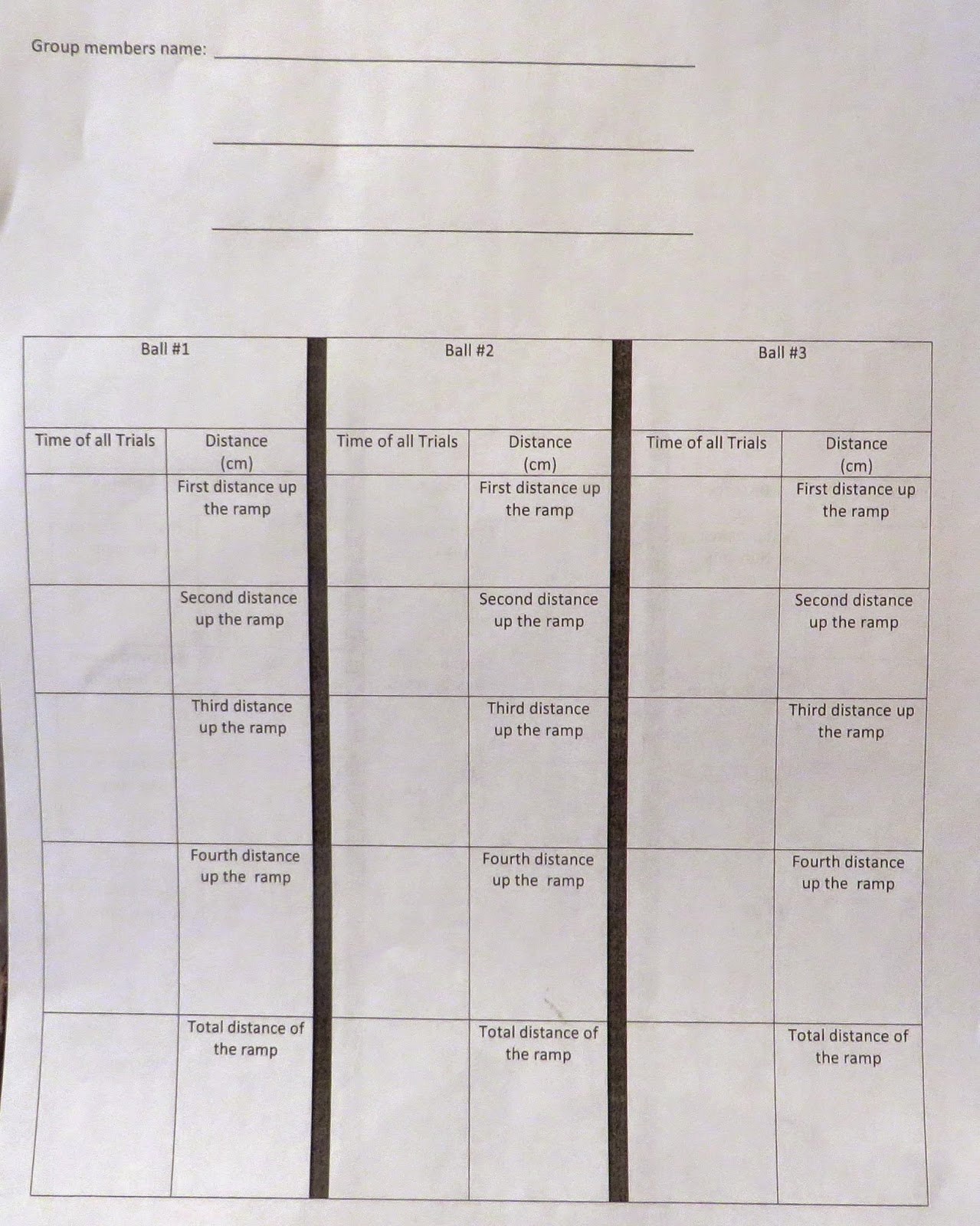 ﻿
I was hoping that this would prevent any confusion. I was clearly worried about the correct answer versus student thinking. I should have let the students record their data anyway they wanted. Here are some pictures of students collecting data. 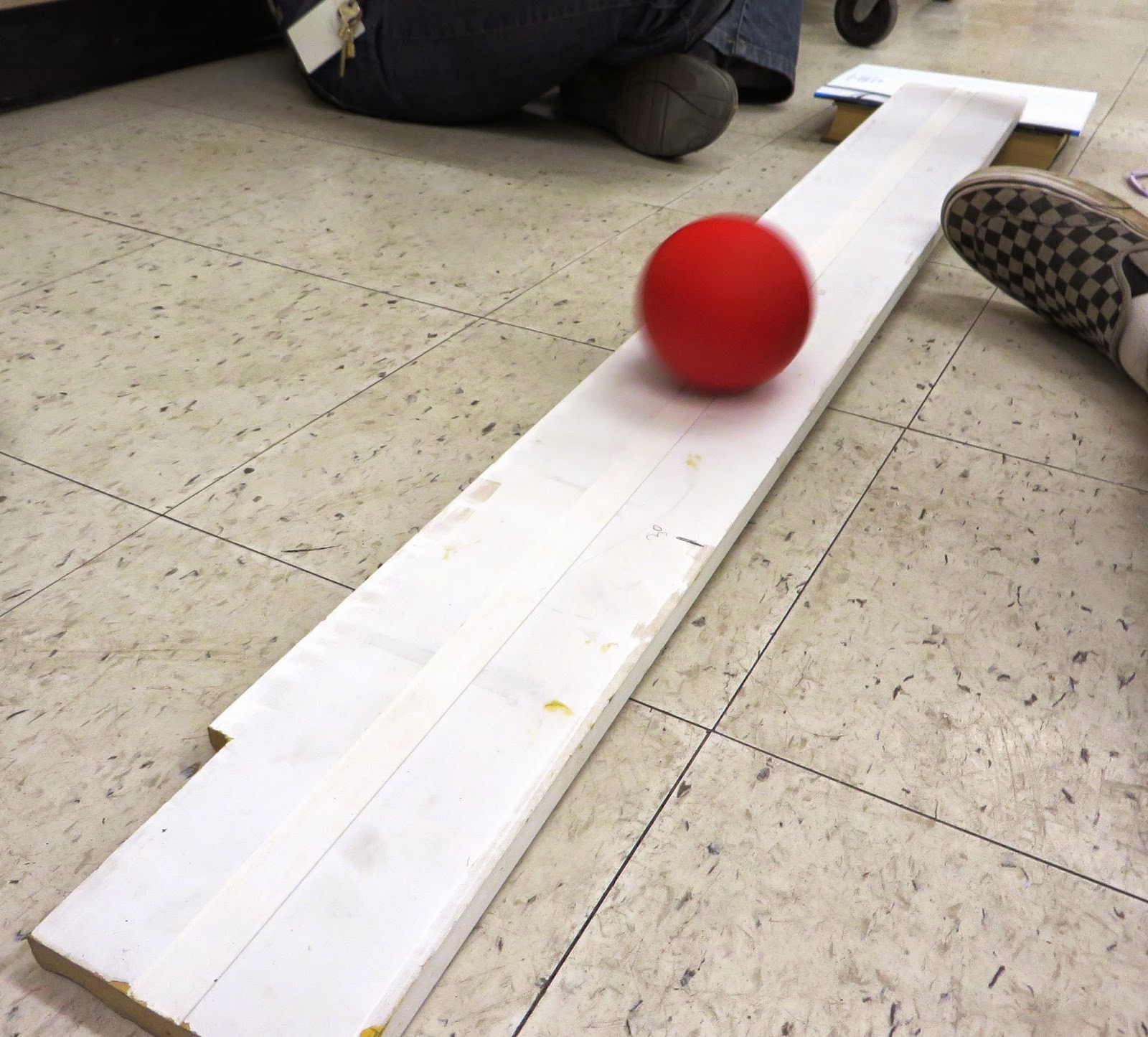 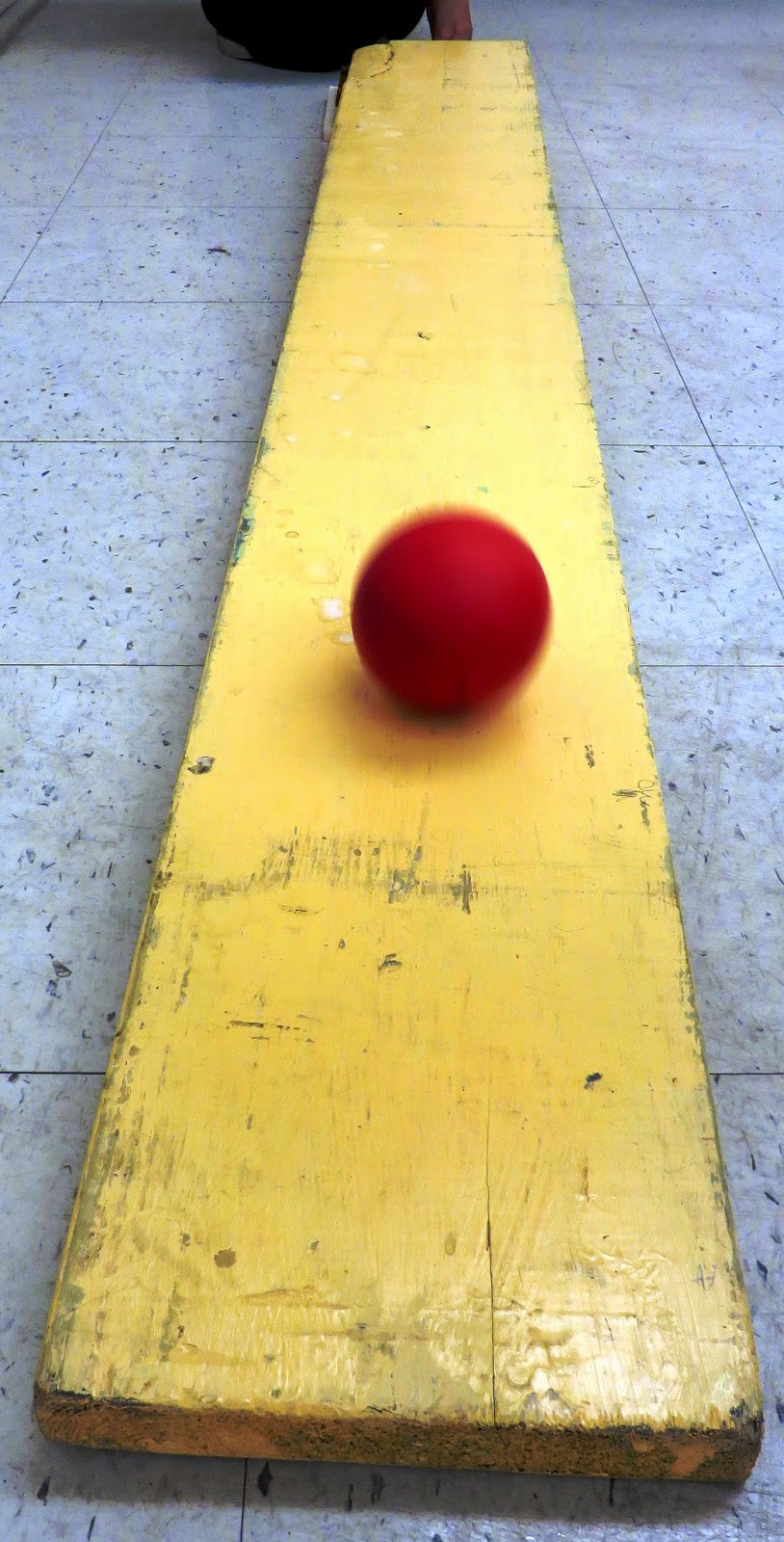 Day 3
This was the day that my lesson study peers observed. Groups were given their data back and were told that they were to model and calculate how long it would take each ball to roll down an 11 meter ramp. Groups worked on whiteboards (VNPS). The groups strategies were varied.

Here is the rundown and the work. Time was tight. If this had not been a lesson study I would have given groups more time to work on their solutions.

Group #1 Chose quadratic relations. Never got to a time for the 11 meter race. 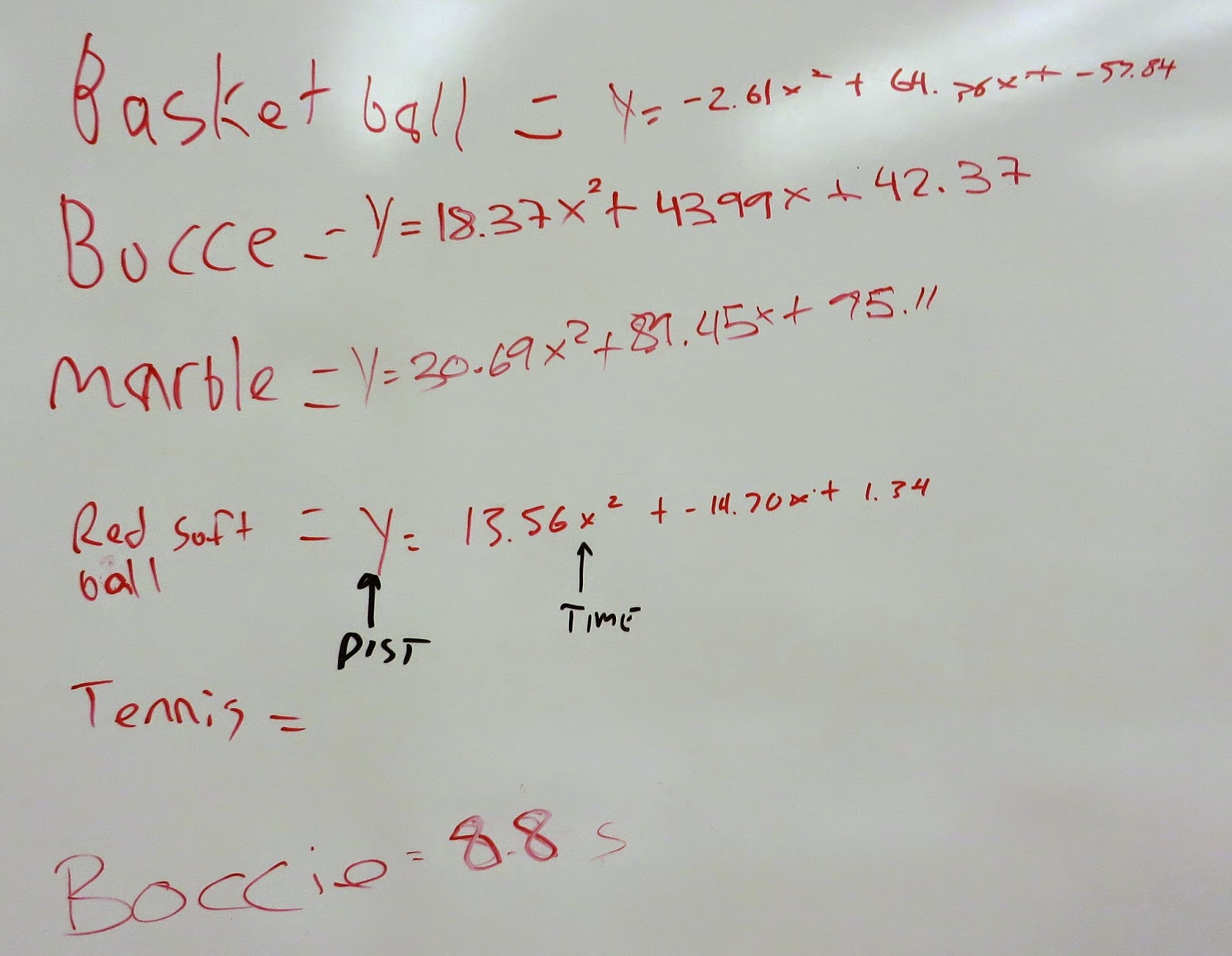 Group #2 Chose a strategy that I am not sure about. They did not get to a solution for each ball for the 11 meter race.
﻿ 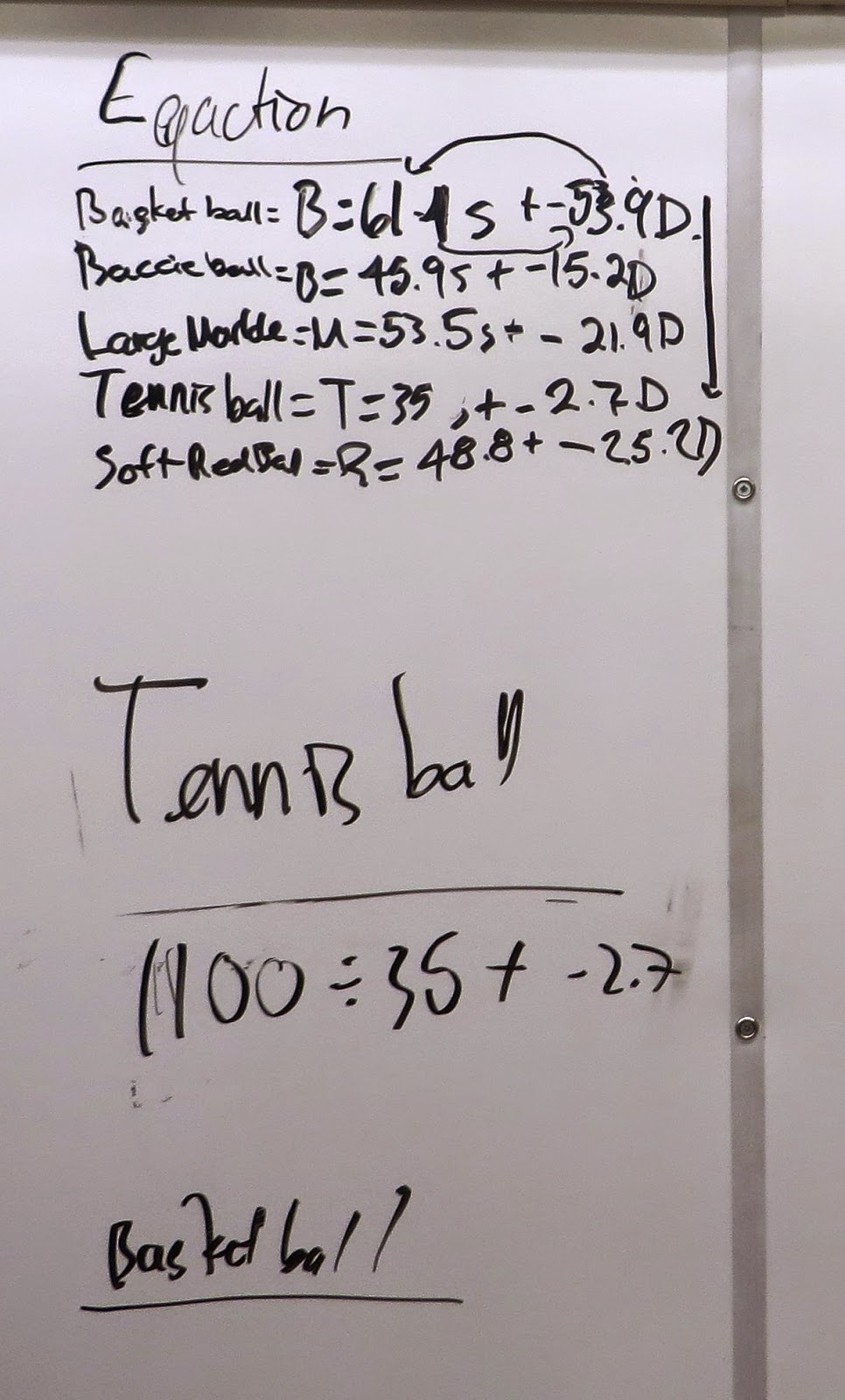 ﻿
Group #3 Chose quadratic relations. Never got to a time for the 11 meter race. 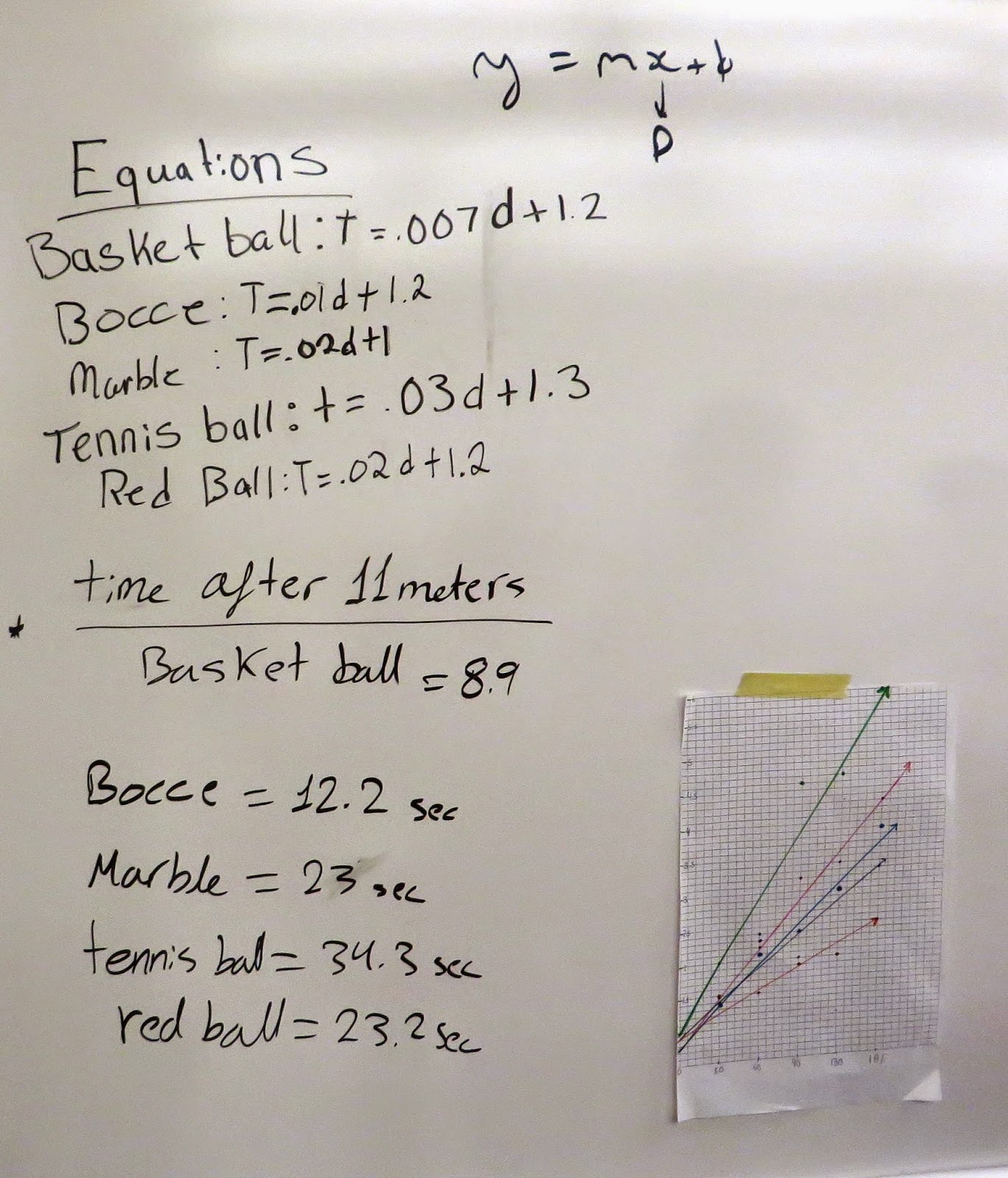 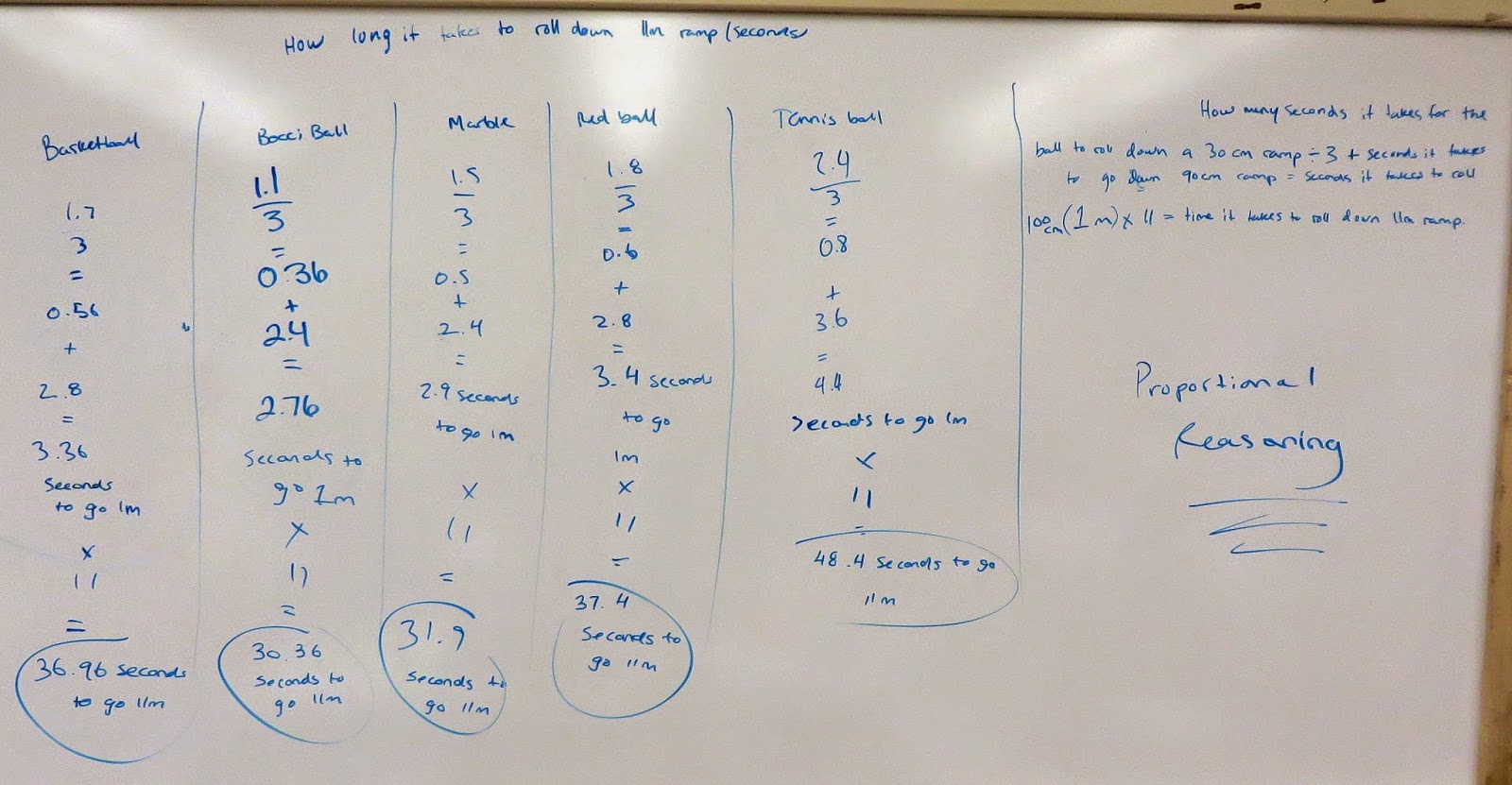 ﻿
Then they realized that the speed of the ball was not constant so they went to quadratics. Did not quite get all the times - almost.
﻿

﻿
Before they started I handed each student a Keep It or Trade It sheet. They would fill this in as they observed each solution. Here is what the handout looked like. 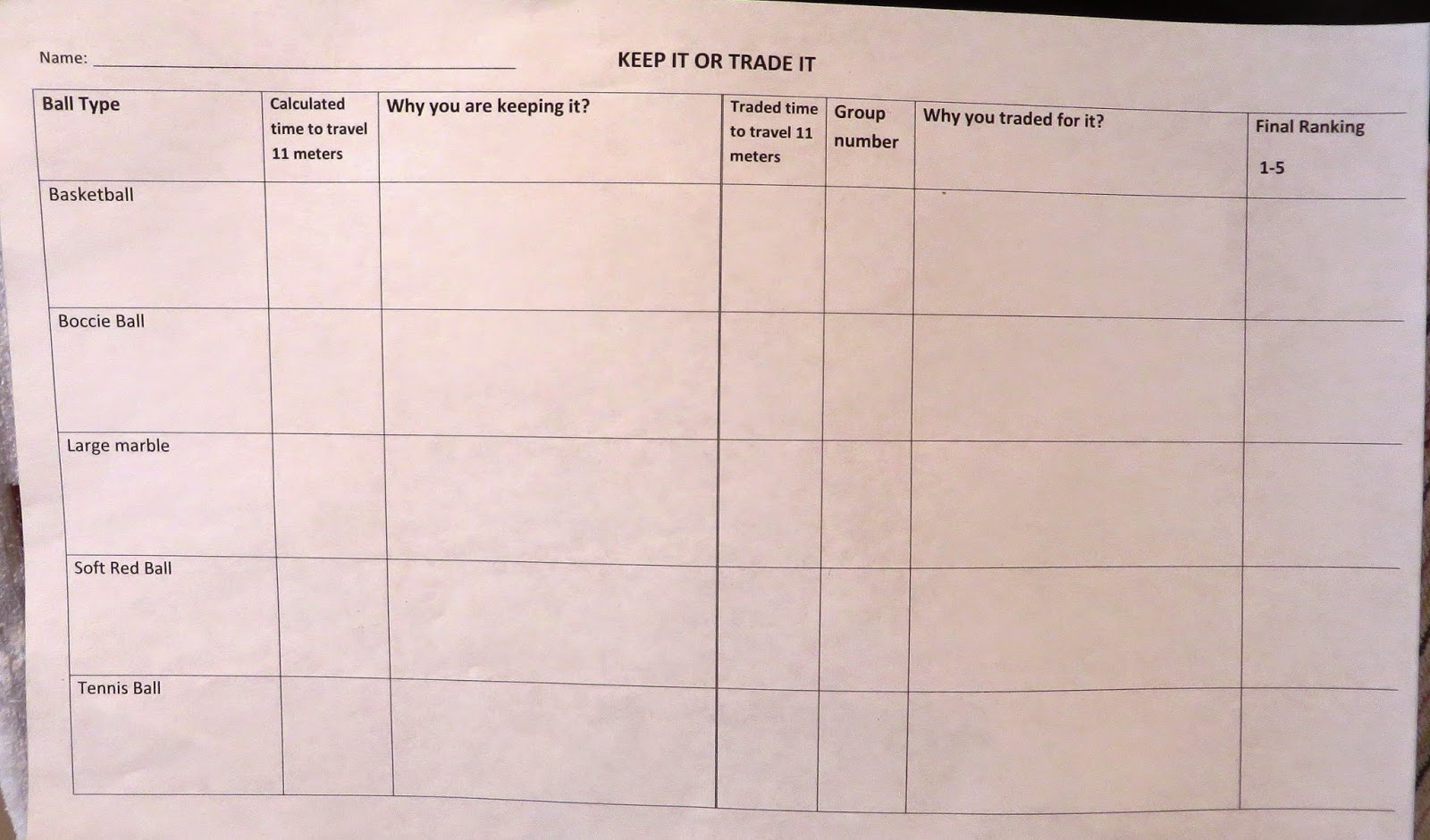 ﻿
Once each student was comfortable with their sheet I asked them to put their rank order of the balls in the race on a whiteboard. I also encouraged the teachers observing to commit. Here is what the board looked like. 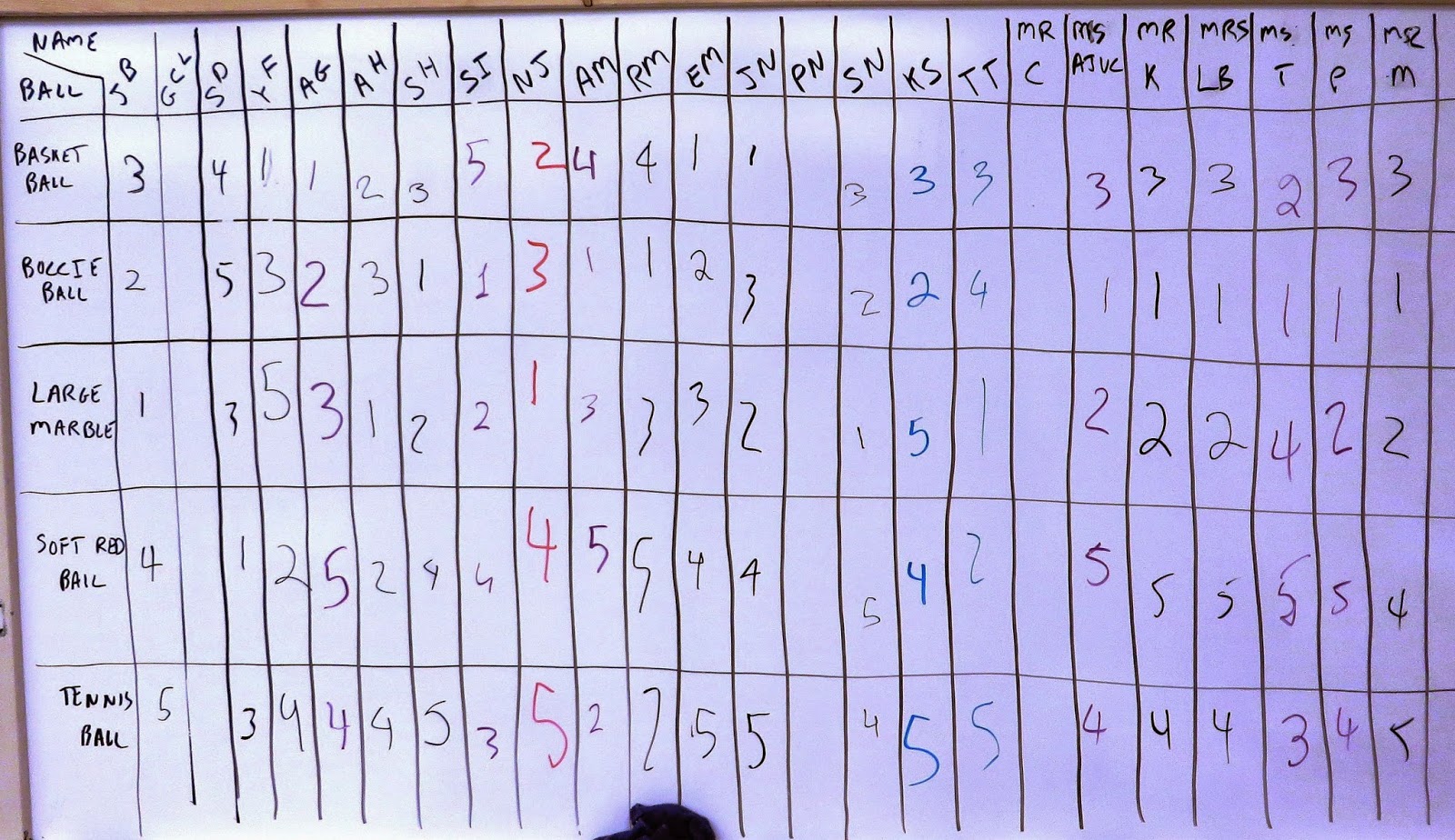 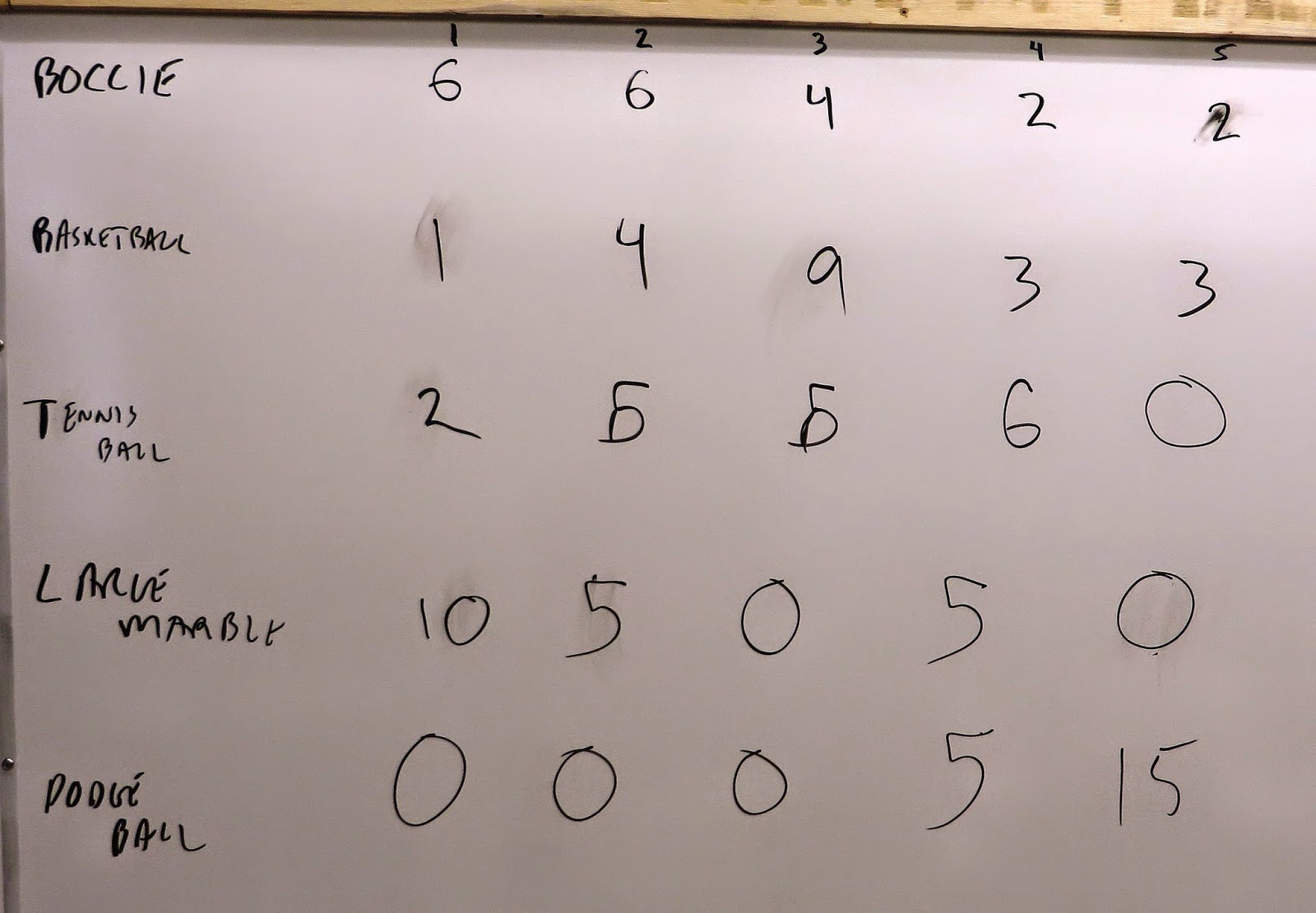 And then it was time for the race. Here is what the situation looked like. 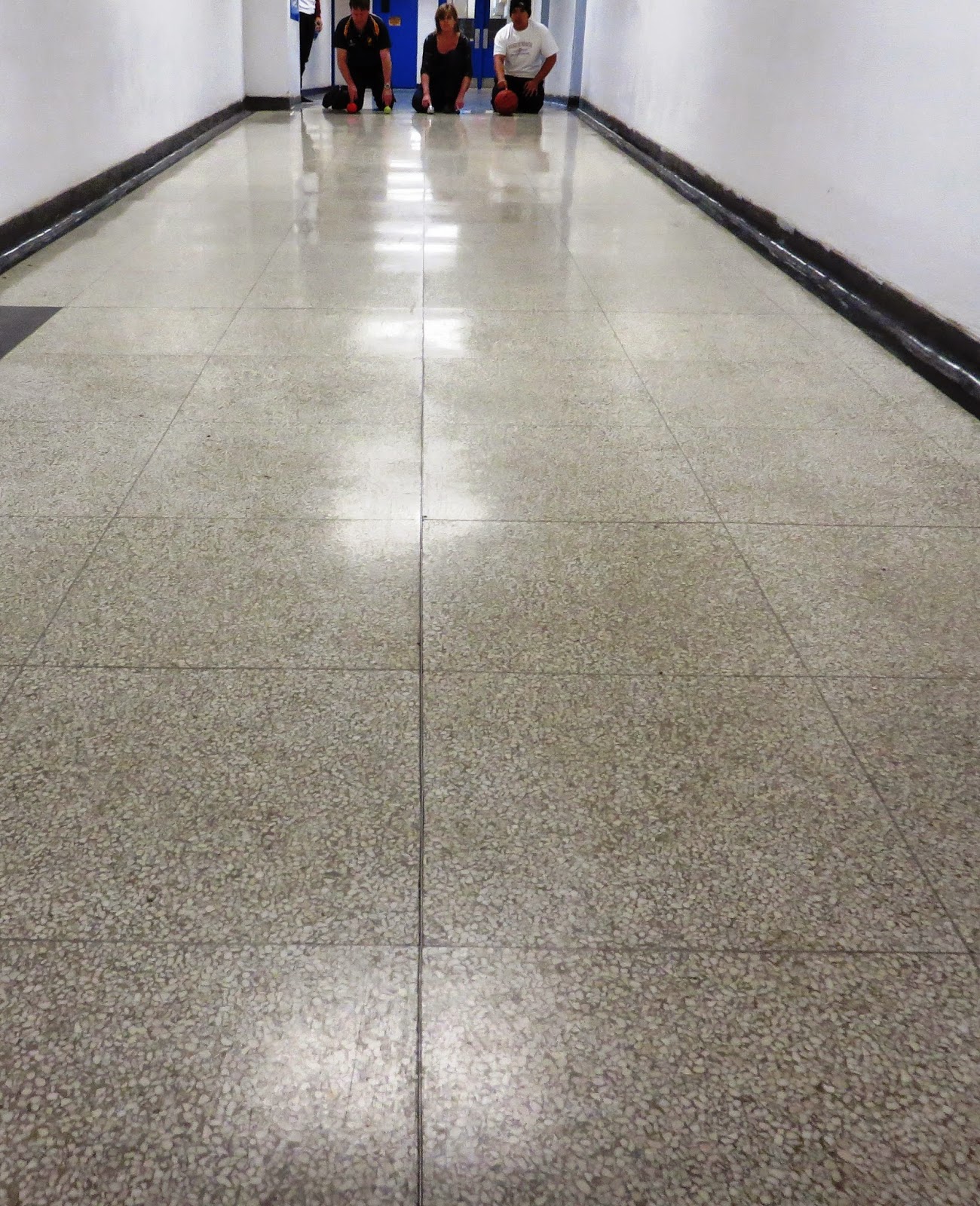 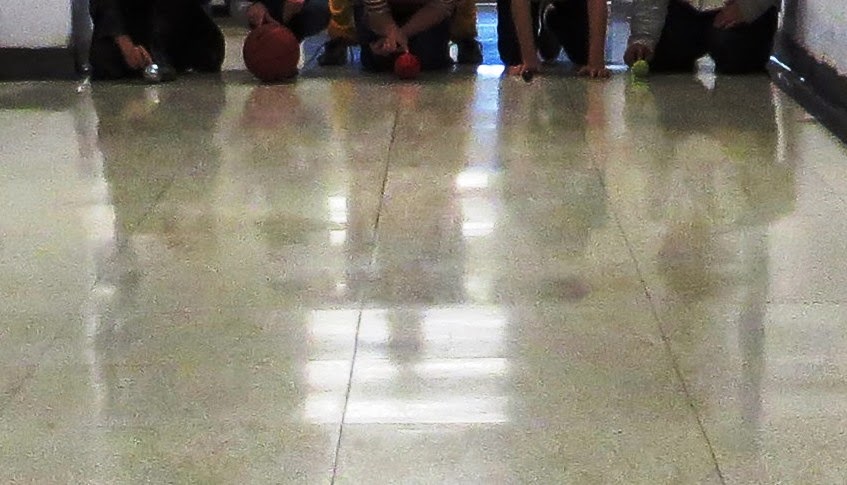 Here are two links to the actual race.
Video One
Video Two

The next day I put all the data into a table.

﻿
Students did a linear and quadratic regression and we calculated the times for each ball based on these models. We then went back to the 11 meter ramp and measured the time for each ball. Here was the table and the final times. 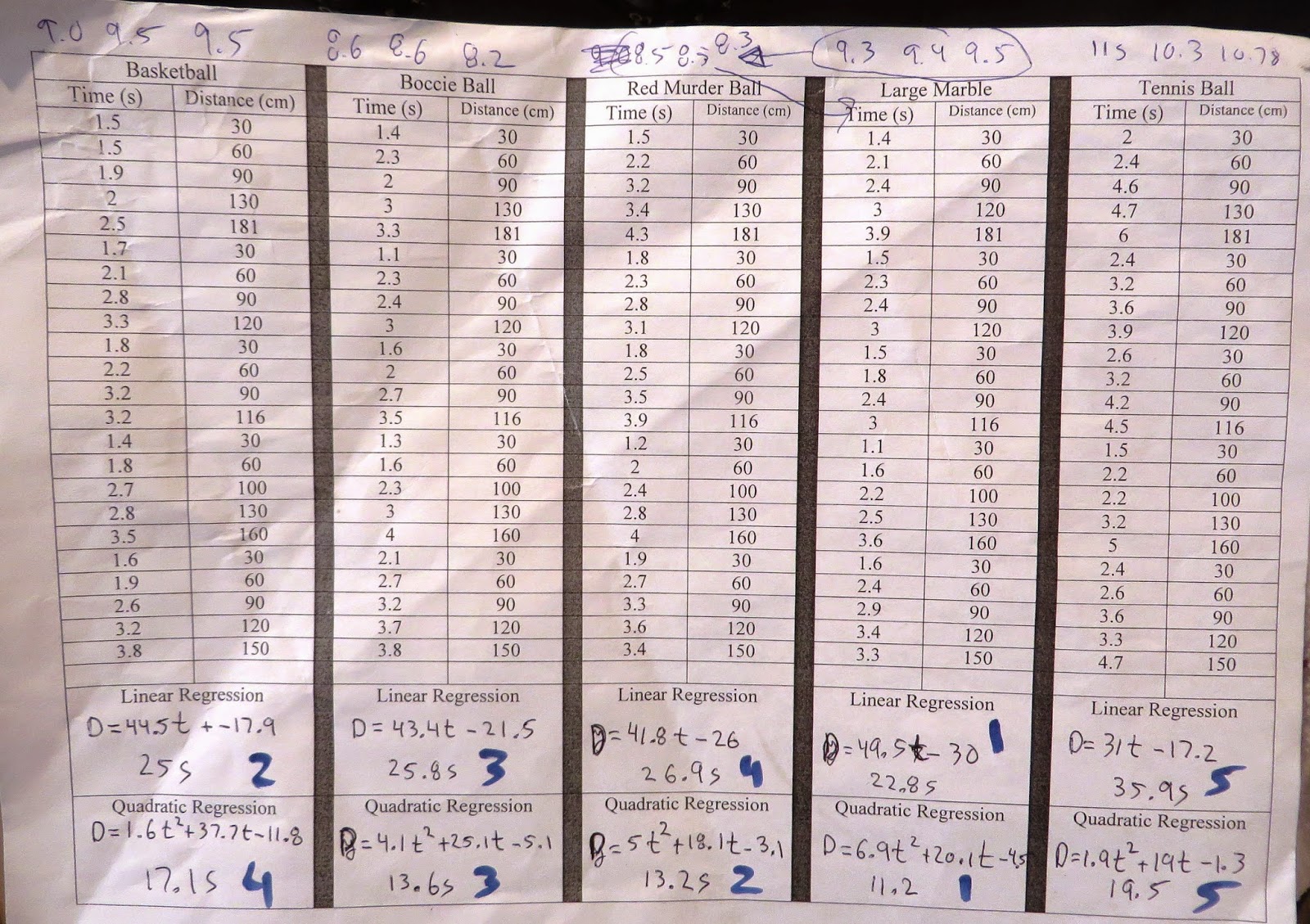 Thought I would throw it out to twitter to see what kind of interest I would get - very little. 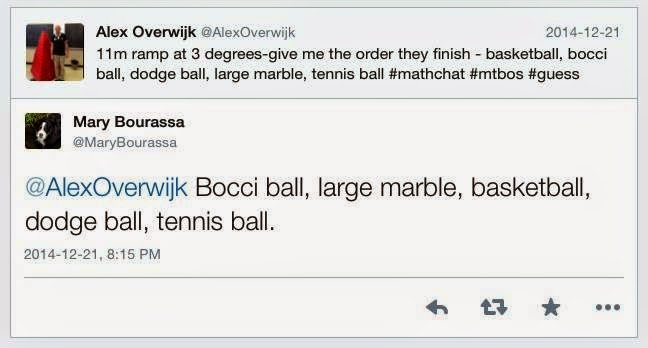 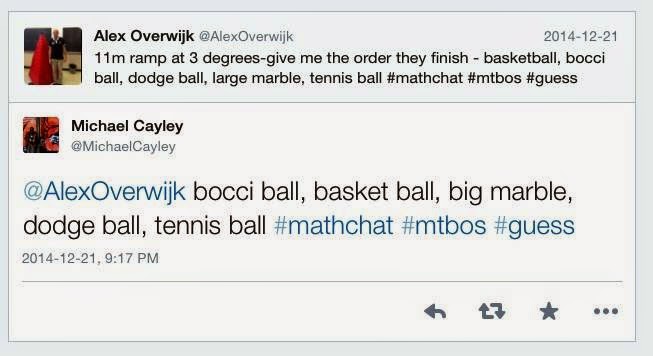 My only regret is that students were not given more time to flush out their ideas and come up with a calculated time for each ball. Covered lots of curriculum - proportional reasoning, trigonometry, linear relations, quadratic relations. Covered lots of mathematical processes - communication, representing, connecting, problem solving, reasoning, selecting tools.
I would love to hear your thoughts.
﻿
Posted by Alex Overwijk at 12:06 PM 1 comment:

Let me make this clear-this is a bit weird- but there is a story behind it.

When I went to Carleton University in the 80's I was fortunate enough to play for the basketball team. By the way they have been the best team in Canada for over a decade.

When December first would roll around and basketball would take a break for exams I started a tradition of growing a beard till Christmas day. Anyone that has known me in my teaching career knows that I have kept this tradition since. Check out this kids comment on RateYourTeacher from "Apr 03, 2003 Go Overwijk. If you have this man, you'll like it best around Christmas. The reverse hair is hilarious. Nice tradition though." So that makes it a true story and a true tradition.

Now over the years I have started growing my beard much earlier than December first, much to the dismay of my wife, but tradition is tradition. Here is a photo of me today. 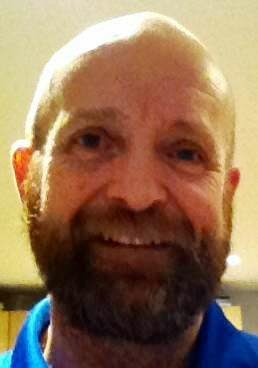 This year I decided to collect some data on beard growth. Here it is. Don't be too grossed out! 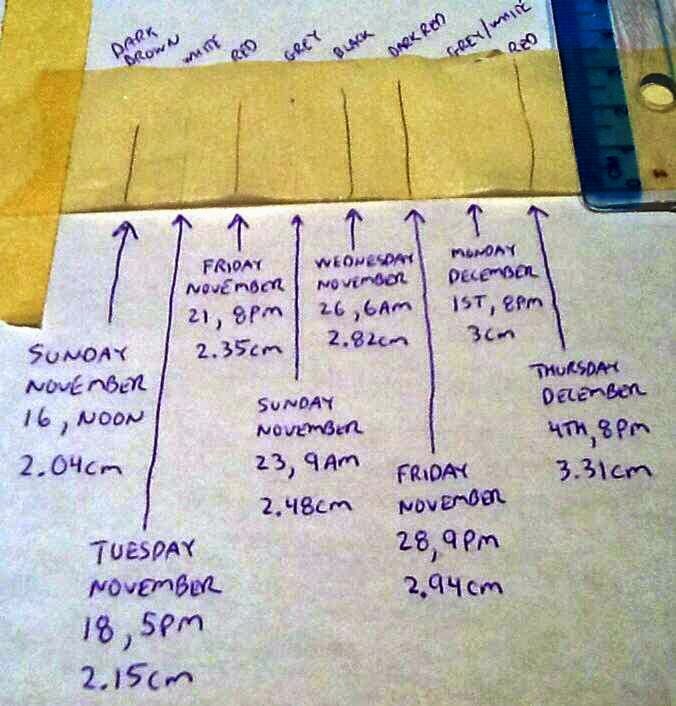 How about:
On what date did I stop shaving this year?
How long will my beard be on Christmas day?
How long would it take me to be Santa? (hint)

Any other wonderings? questions?
Also I am taking answers and solutions to the first two questions. Answers revealed on Christmas day!

UPDATE! December 28th, 2014
So before I show final work and reveal answers here is a couple pictures of the final product. Particularly proud. As Andrew Stadel @mr_stadel hashtagged #beardoweirdo ! 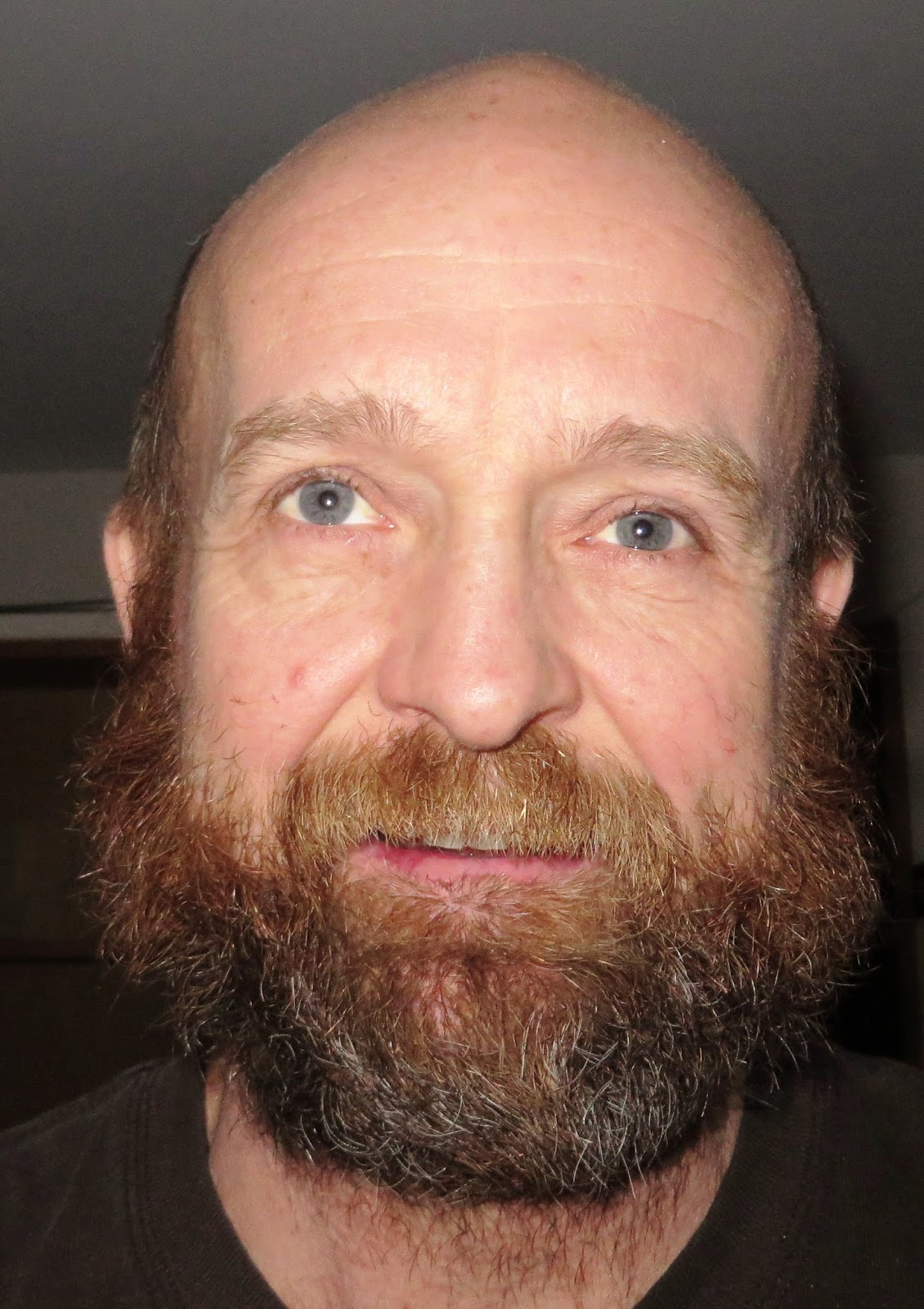 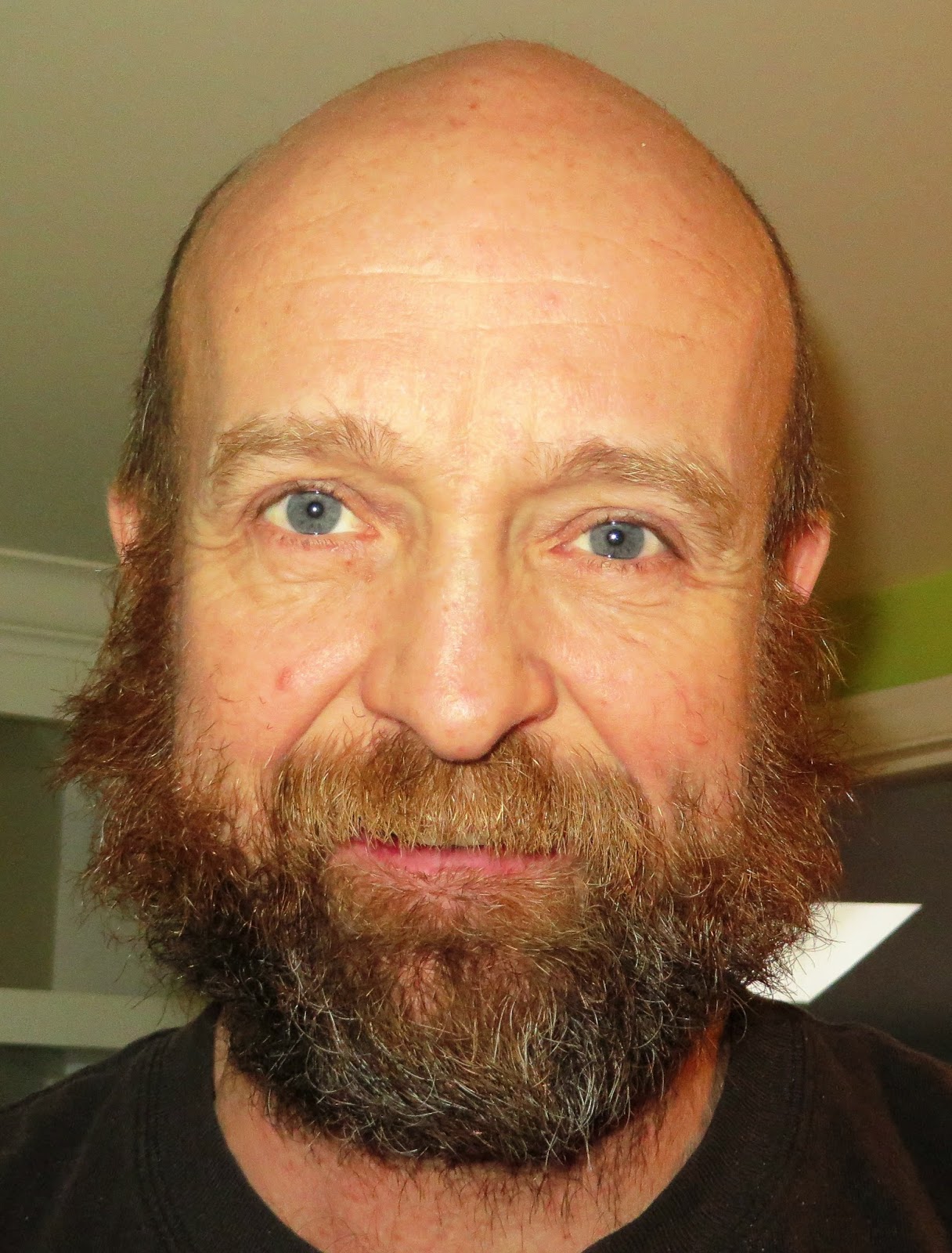 Here is my solution to the original questions based on the data that I collected.
﻿ 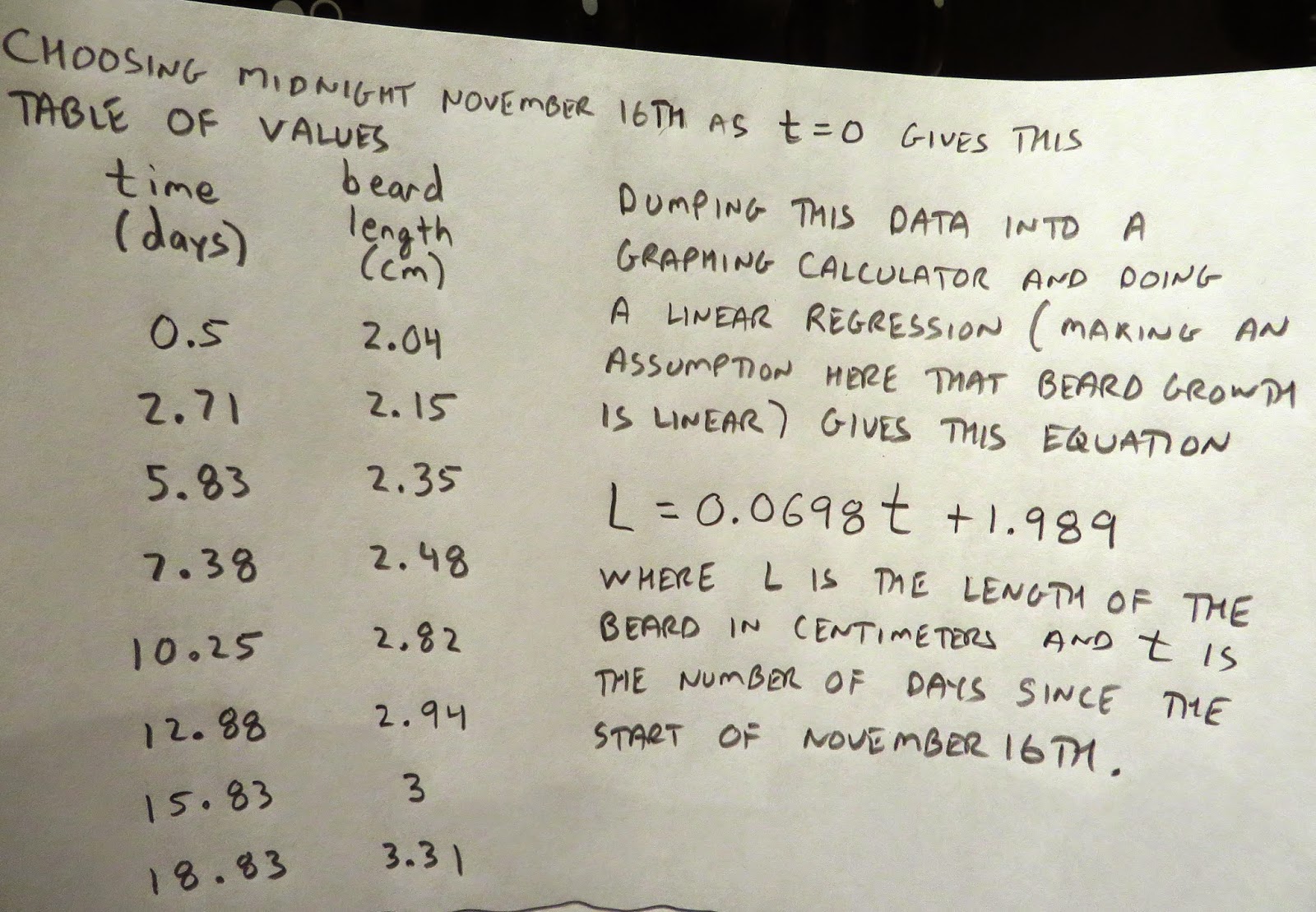 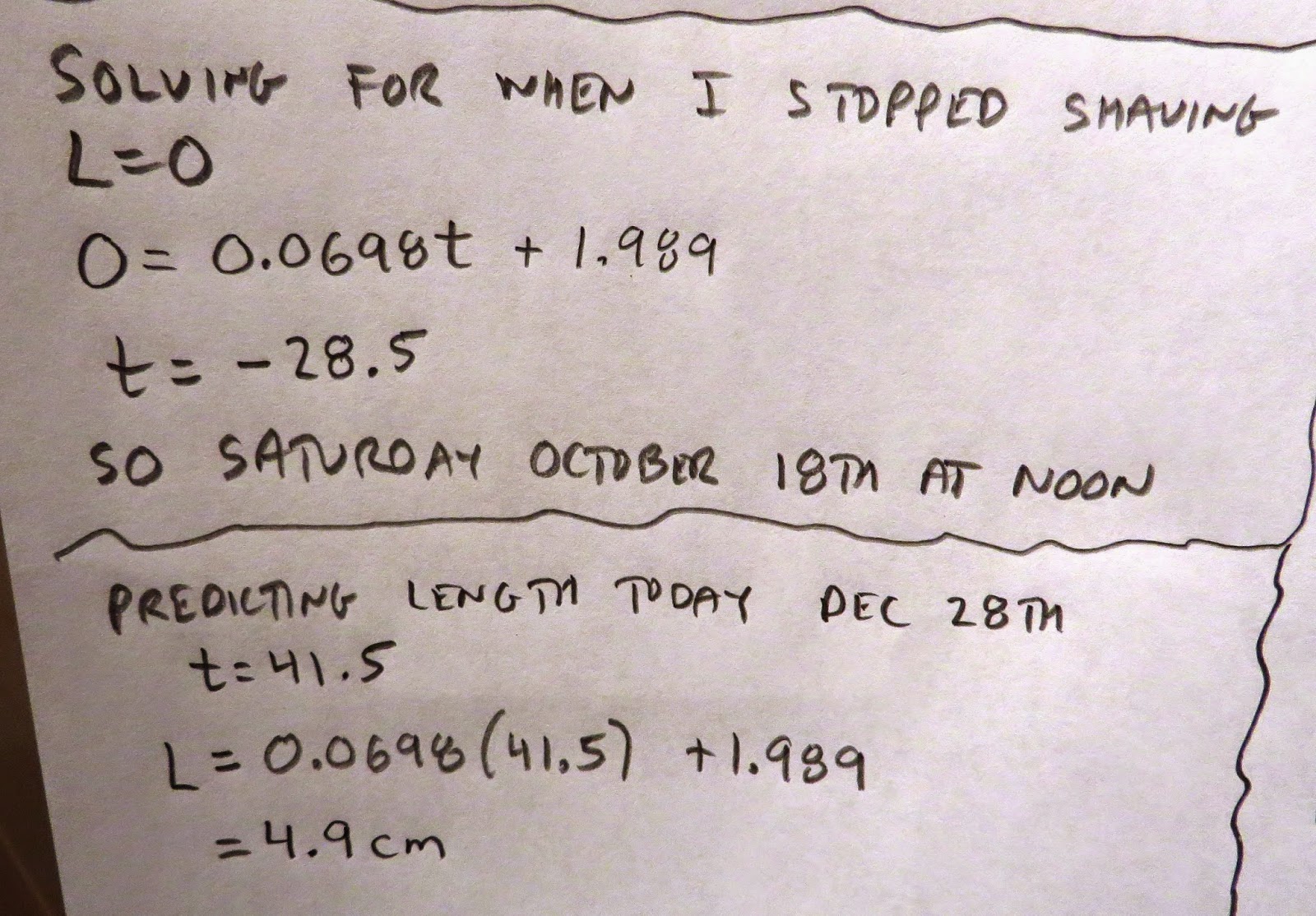 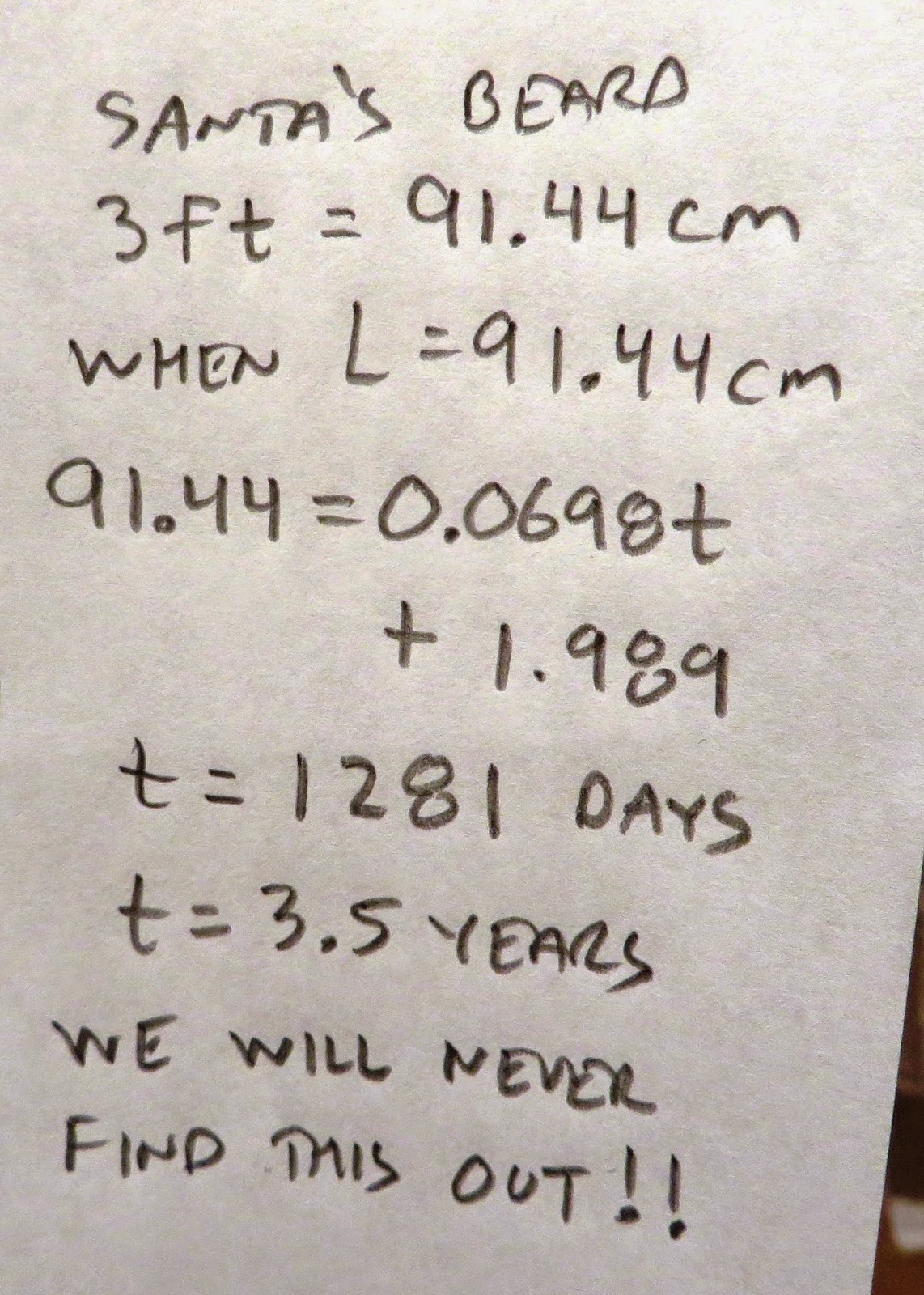 And now for the actual date I stopped shaving Tuesday October 22nd.
As for the length of my beard I took three samples and the longest was 4.45 cm. Here is a picture. 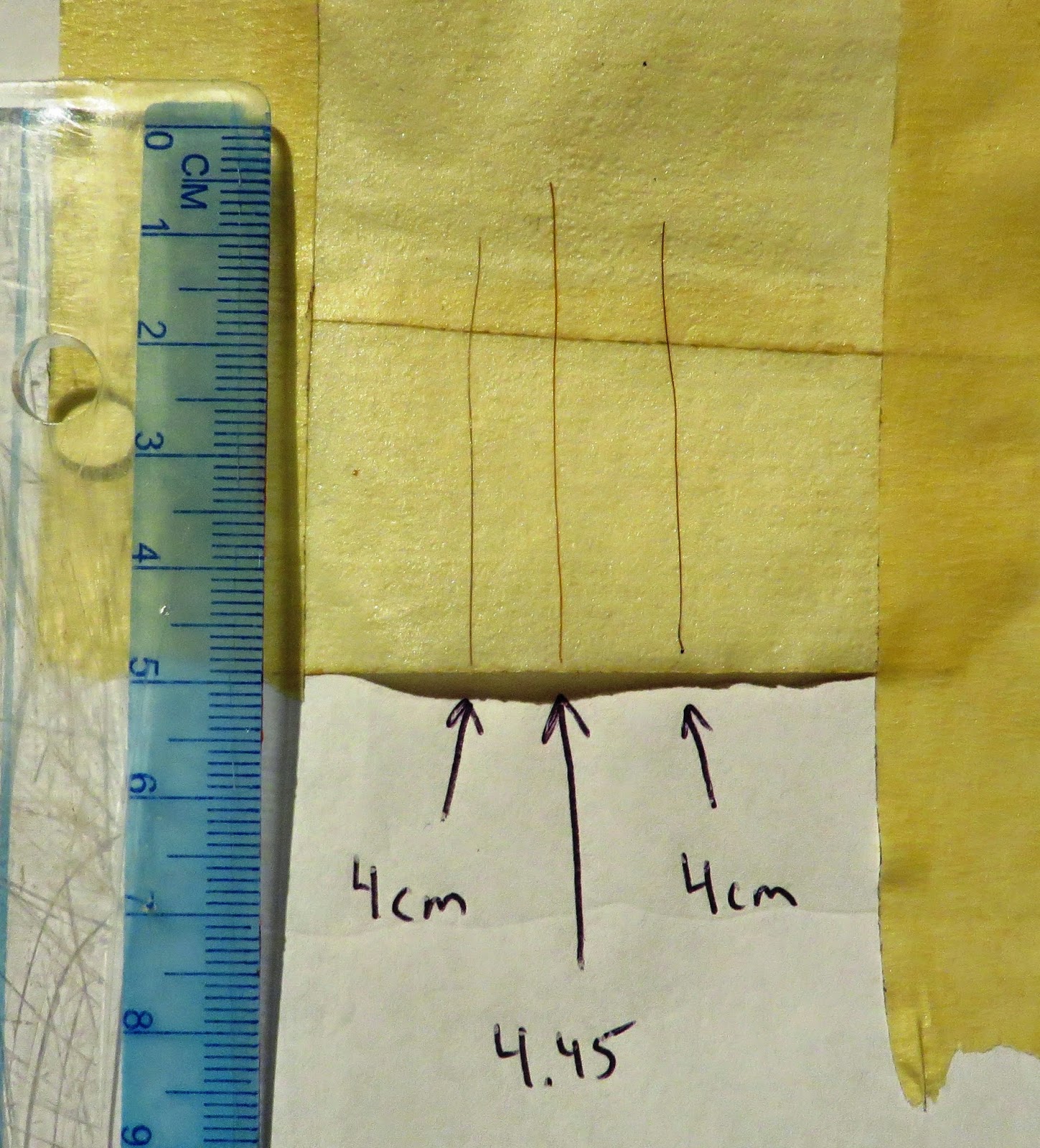 ﻿
And what would be growing a beard without a little fun shaving it off.
﻿ 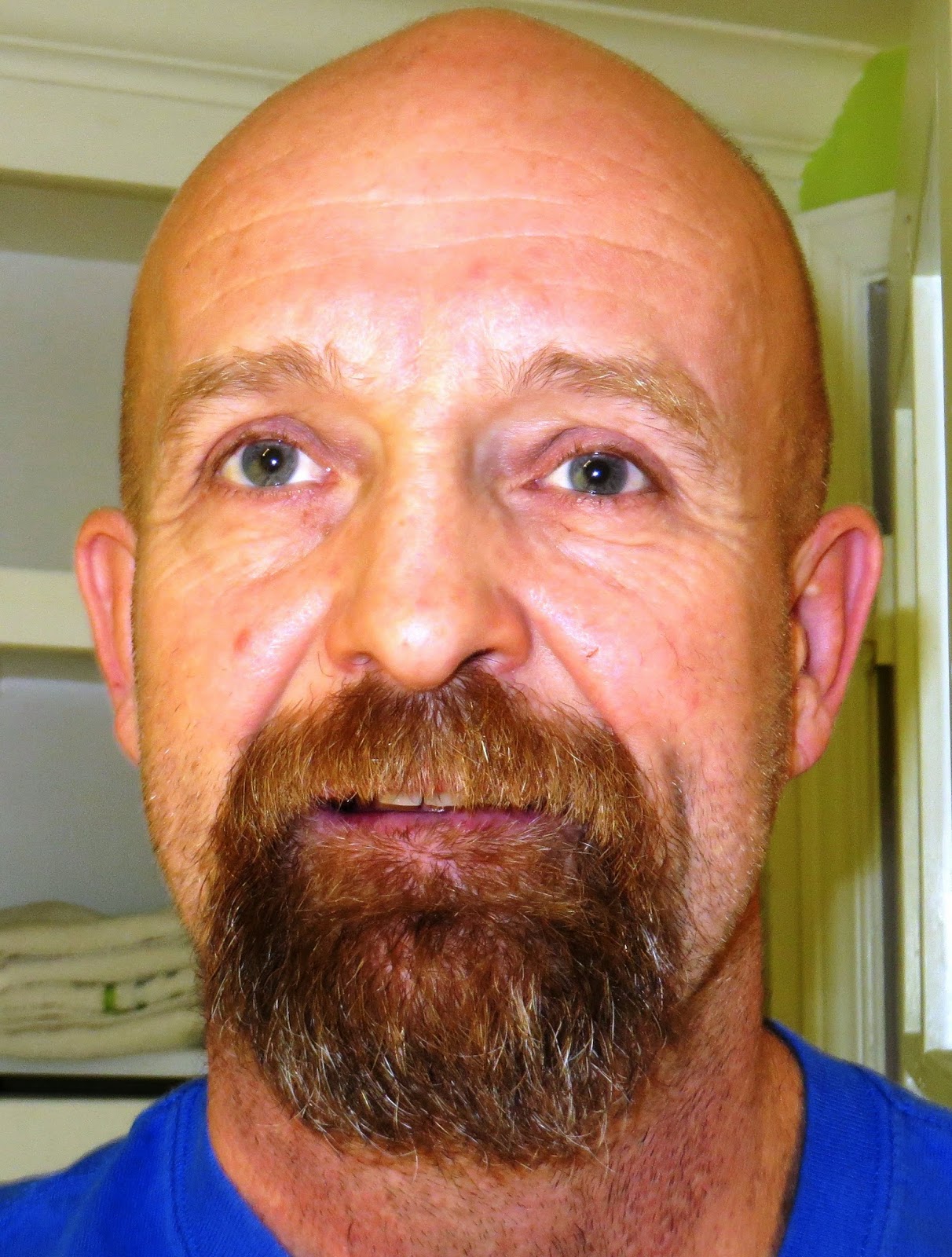 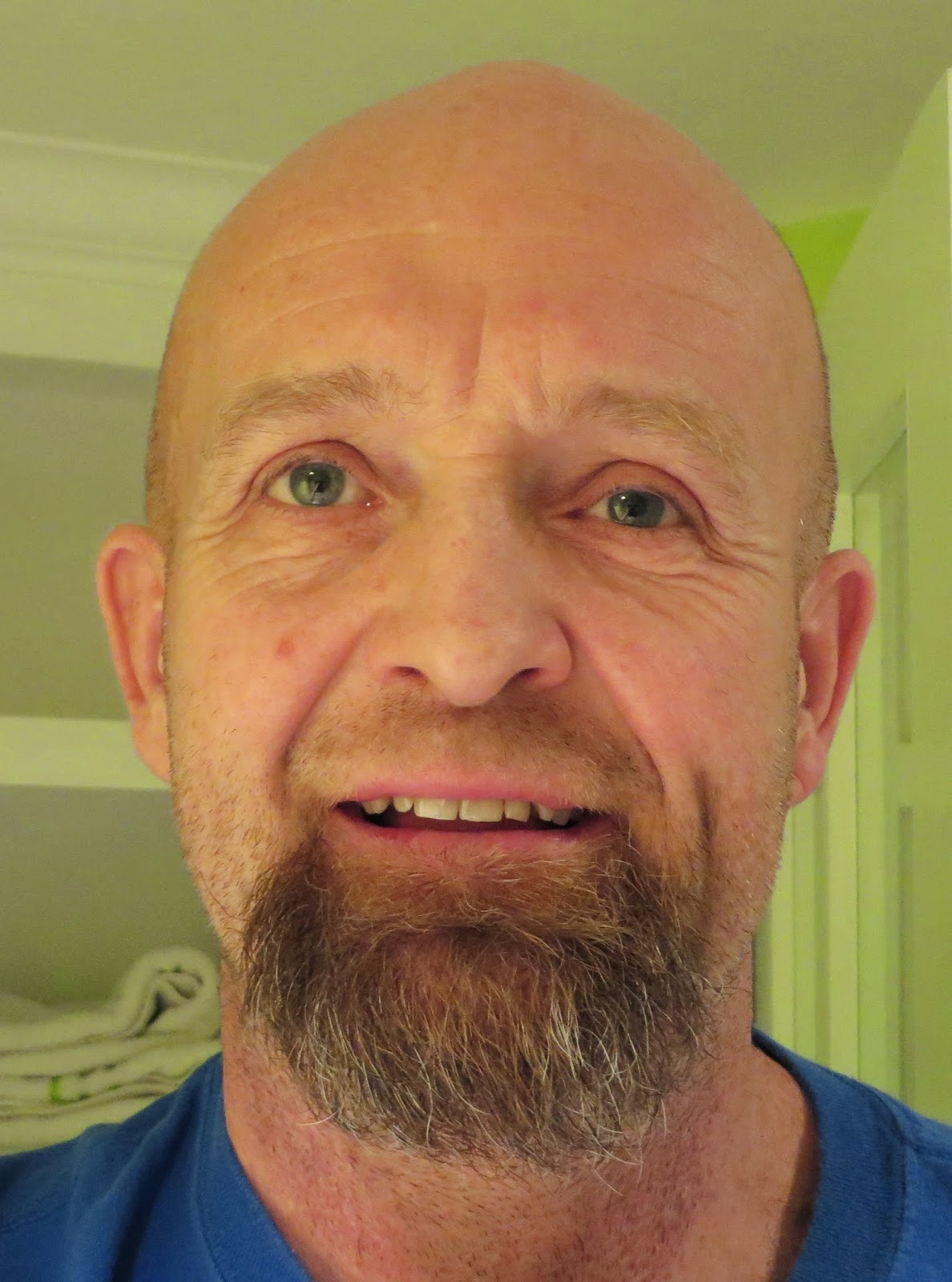 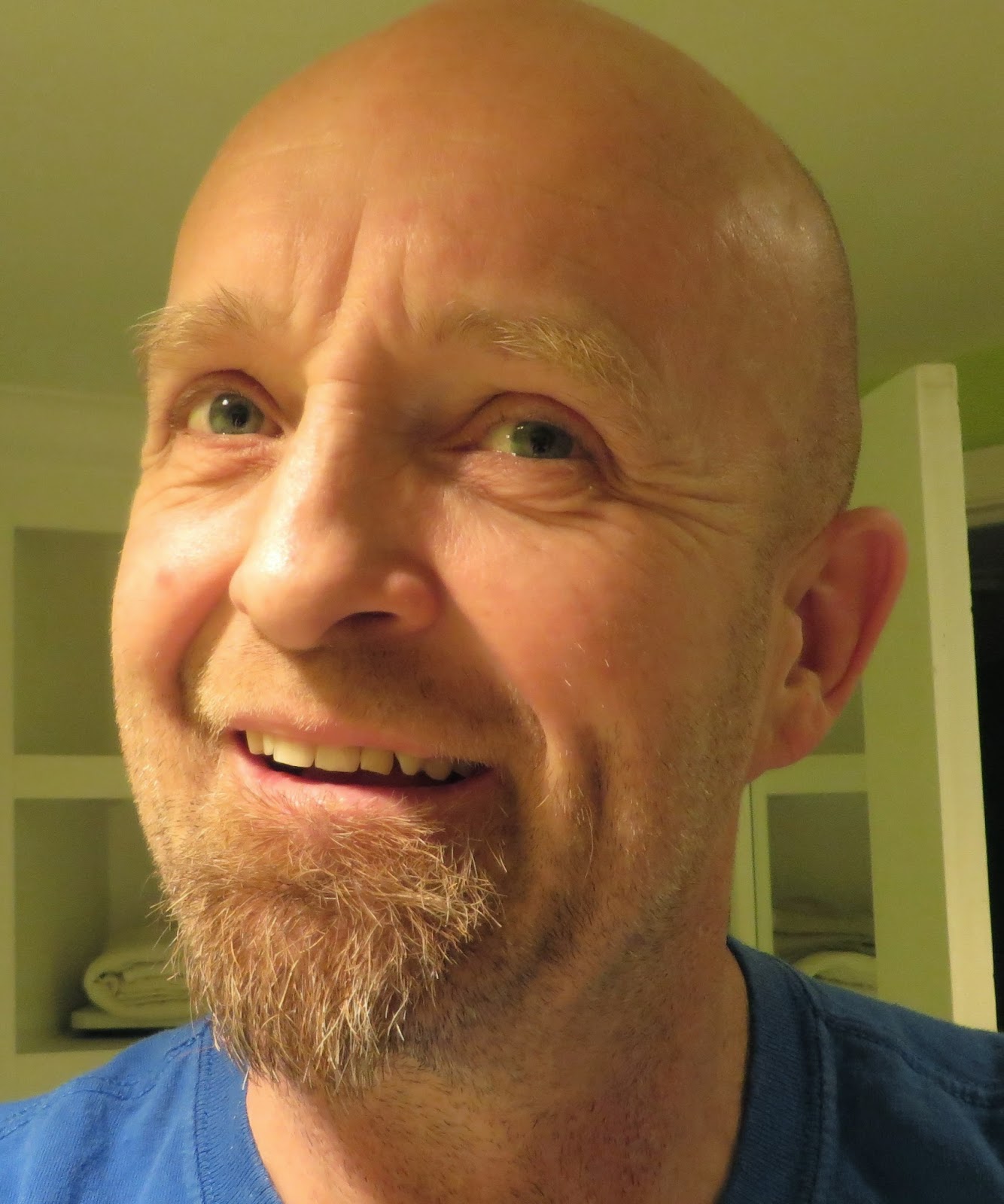 And finally back to normal. #happywife. Hey is that a glass of red wine in the background? Gotta go! 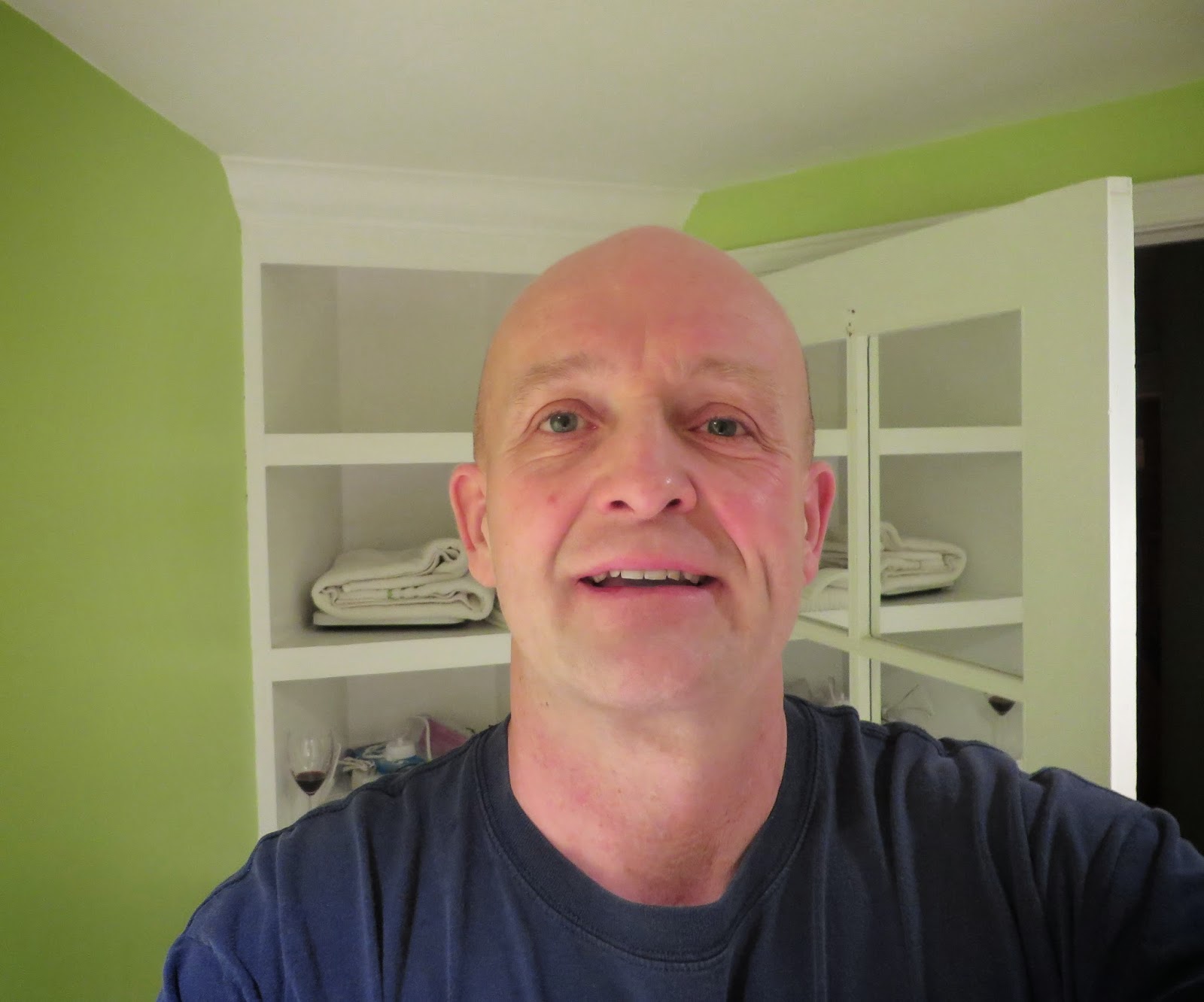