Talking Math with Your Kids #TMWYK through Chinese Cribbage

Now that summer is officially over I thought I might share a game I like to play when I am at my cottage during the summer months. I enjoy playing this game while I am unwinding from my crazy 10 months that I call a life. I am lucky enough that I have a cottage to hang out at with my family for the summer months. A few pics of what I get to enjoy. 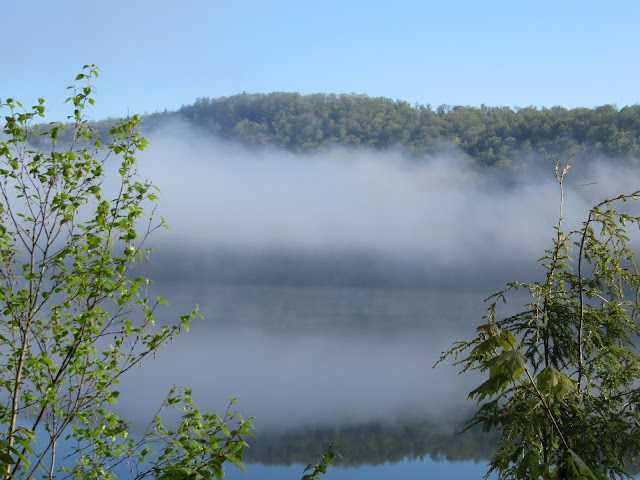 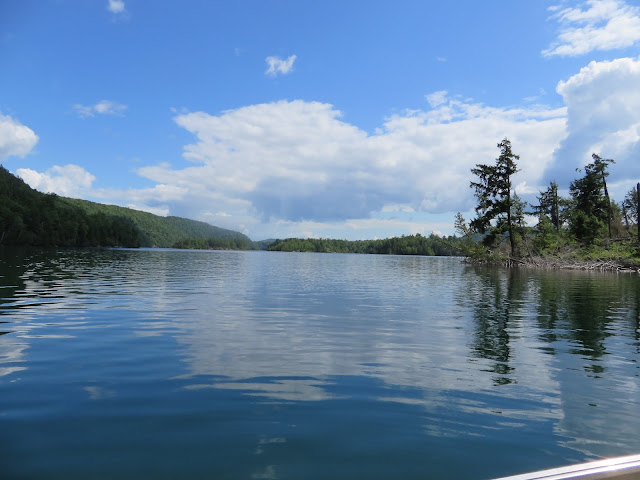 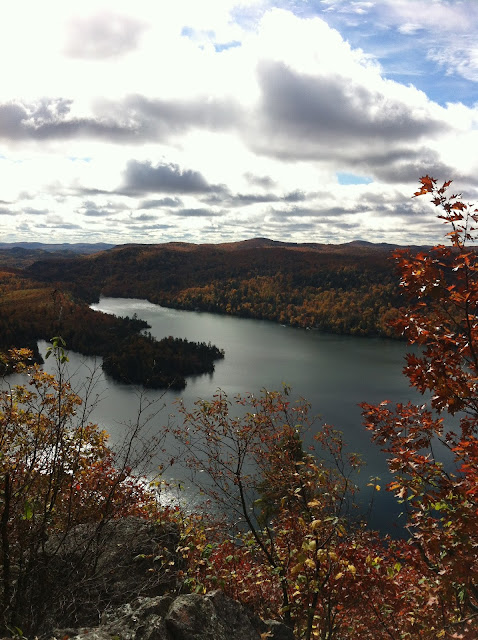 If you are a fan of Talking Math with your Kids from Christopher Danielson or are a fan of the card game cribbage then this post is for you.

I grew up in a house where a deck of cards went a long way. I am the youngest of 4 and we all played cards. We played go fish, solitaire, euchre,  31, BlackJack, Kings in the Corner, Hearts, Cribbage and the list goes on.

In cribbage you get 4 cards and a starter card will get cut or flipped up.

SCORING
If you have not played cribbage here is how you score points:

CHINESE CRIBBAGE
When I was younger someone taught me a game called chinese cribbage where you play 5 hands at a time. You add up all your scores for each hand and total the 5 hands. Anything over thirty makes you go up and anything under thirty makes you go down. You play until you get to 31 in your up/down scores. So really solitaire cribbage.

Let me explain in more detail:

To start you lay out your four hands (the down card is your 5th hand which is your missy/kitty). This is actually a terrible start because I have flipped three aces. 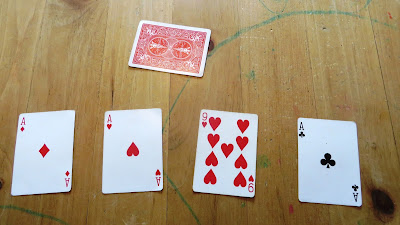 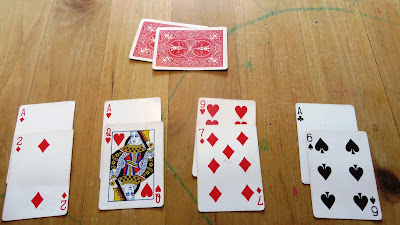 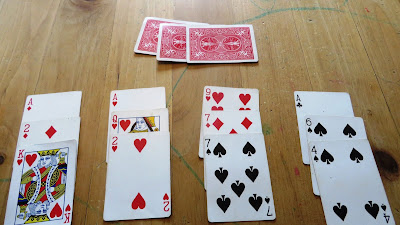 Repeat for fourth card in each hand. The first card was a 3 which I put in the first hand for a run and a fifteen. The second card I pulled was a Queen which I put with the last hand for a fifteen. Third card was a 9 which I put with the third hand for a pair of nine's. And then of course my fourth card was the 8 which I had to put in the second hand (clearly it would of been better in the third hand but I had just filled that-shit). Fifth card goes to the missy/kitty to complete the crib hand. you turn up the next card which becomes the fifth card in all five hands. 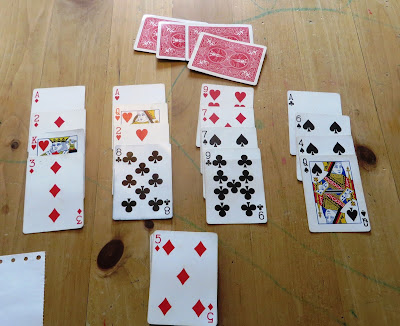 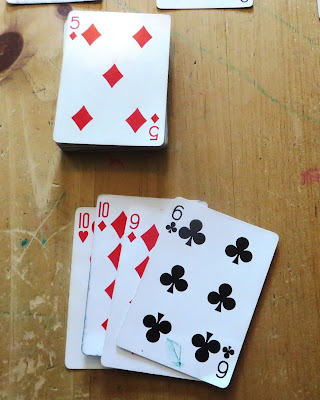 Here are the hands tallied.

Here is my second full hand scored below 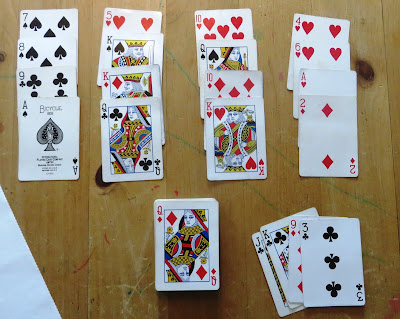 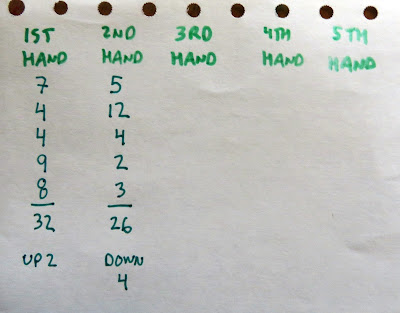 And you continue to play until you get to 31. 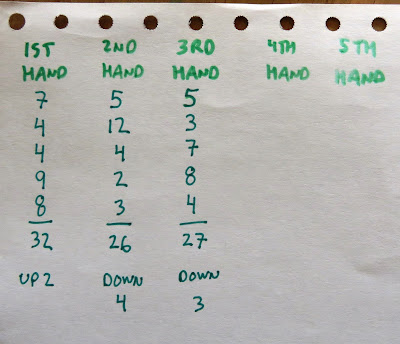 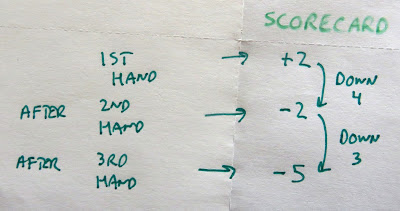 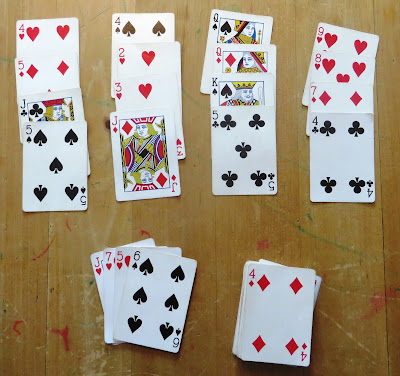 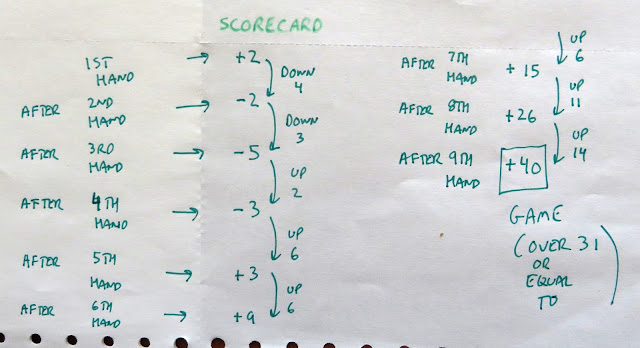 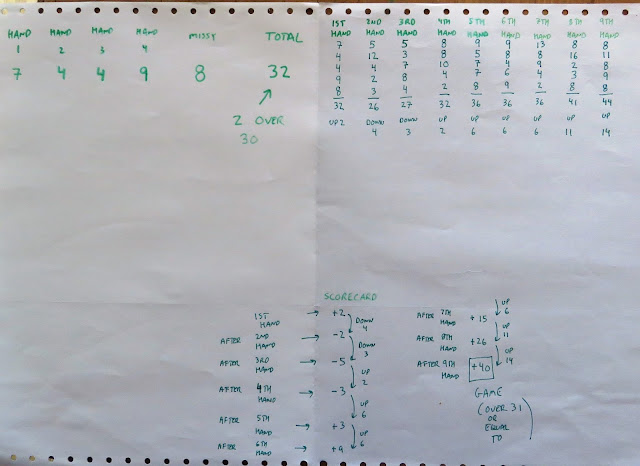 Of course, I do not typically write all that down. Did it to help explain. Below is what my scoresheet actually looks like. You are seeing 4 full games. first, second and third games all took 7 hands and my second game took 4 hands. 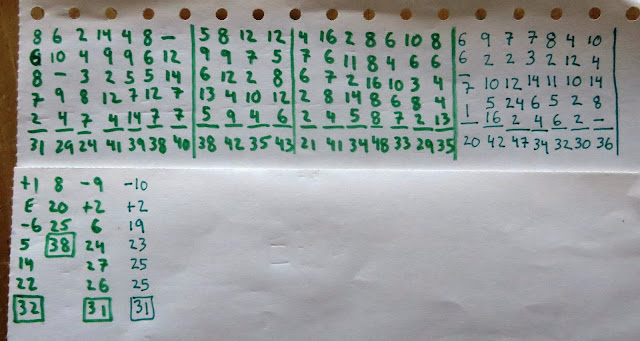 TALKING MATH WITH YOUR KIDS #TMWYK

I taught my oldest son who is 8 how to play cribbage. He has seen me play chinese cribbage and asked me about it. I like this. Lots of math. Here is his scorecard from the summer.

Here is a video of him playing it. I encourage you to watch this.

My youngest son watched us play for quite a while. He invented his own game called Big Hands.
A ton of beauty in both these videos. Here is my youngest explaining Big Hands. All I can say about this game is that I have watched him play it on multiple occasions and he plays it exactly the same way every time.

If you have young kids I encourage you to get them playing cards.
Posted by Alex Overwijk at 11:28 PM 1 comment: