Drafted this post a long time ago and finally getting back to it after @jstevens009 commented about my stacking ability in a picture on my twitter avatar. 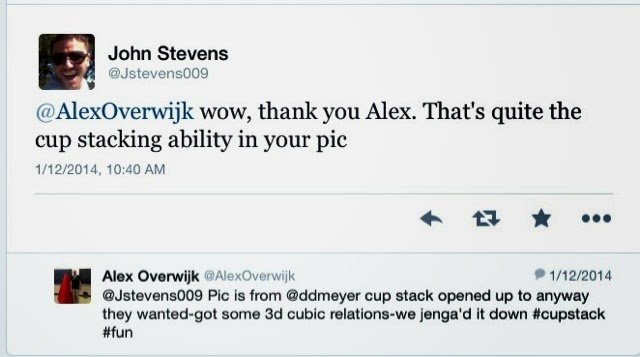 I have done this two different semesters. (Make that three now). Sometimes it takes everything I have to write about activities - I just feel like I am such a better talker than writer and it doesn`t feel like I get any better at writing. Anyhow........I have presented this activity so many times in presentations and have just not got around to finishing this post. Today is the day!

Of course thanks to Dan Meyer, Fawn Nguyen, Andrew Stadel and many others who inspired this idea.... as is typical with our lesson study we are trying to open these tasks up - unscaffolding them. Giving the task a  "low floor and a high ceiling. "


We started with th image below and asked the students to write what questions came to mind. We got a bunch. Here is a sample:
Why is the cup the same colour as your shirt?
How tall is the cup?
How tall are you?
How many cups to make Mr. O?
If we chopped up Mr. O, how many cups would we fill?
How many cups can you drink?
Why are you standing next to a cup?

We settled on " How many cups to make a Mr. "O"? as this was the most popular question. Of course this was the question we were hoping for.

We then put the students in groups of three (homogeneous). They were to settle on a stacking plan and then draw a diagram of their stacking plan, a guess to low, a guess to high, and their best guess for how many cups would make my height.

Here is the form they filled out.

Once they had done this we gave them ten cups and asked them to do the following on chart paper. Represent their stack with a picture, table of values, graph, equation and show their calculation to get the answer to" How many cups to make a Mr. "O"?

Groups were given two days to repeat this as many ways as they could think of.
Here are some photos of what they came up with and what it looked like when we built it on day three.

The first one is what I call top bottom top bottom. Direct variation or linear relation with a height intercept of zero. Total of 16 cups to reach my height. 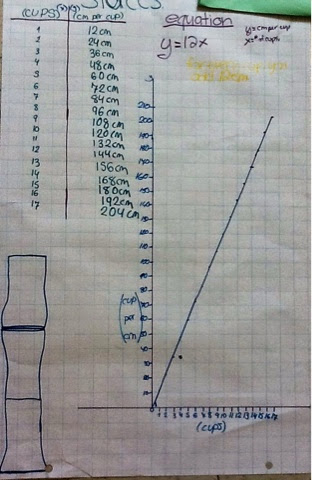 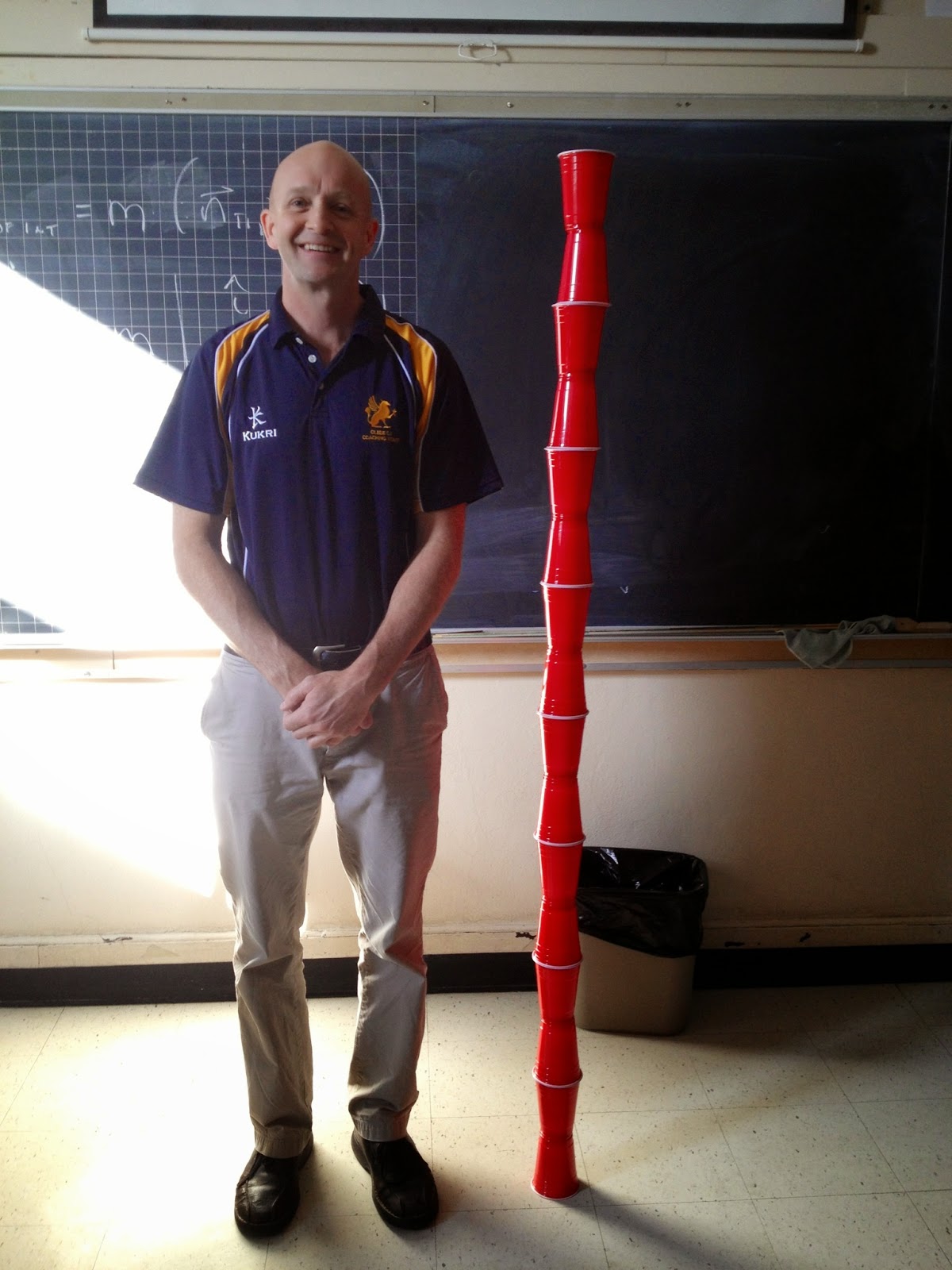 The second one is what I call the inside each other method. Linear relation. Total number of cups to reach my height is 304. 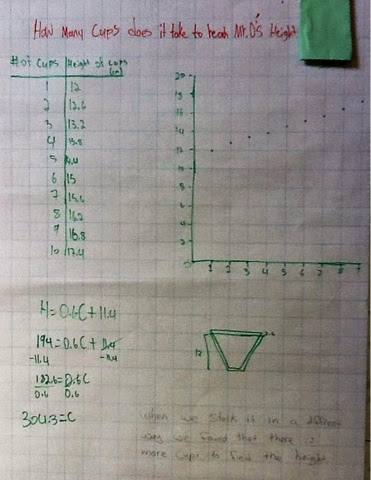 The third one is what I call the triangle method. Quadratic relationship. Total number of cups to reach my height is 136. 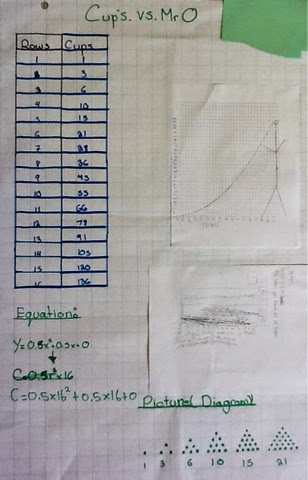 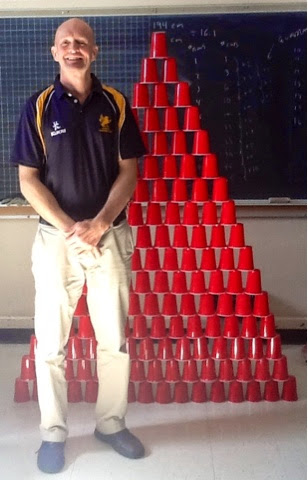 The fourth one is a three dimensional triangular pyramid. A cubic relationship. Total number of cups to reach my height 816. 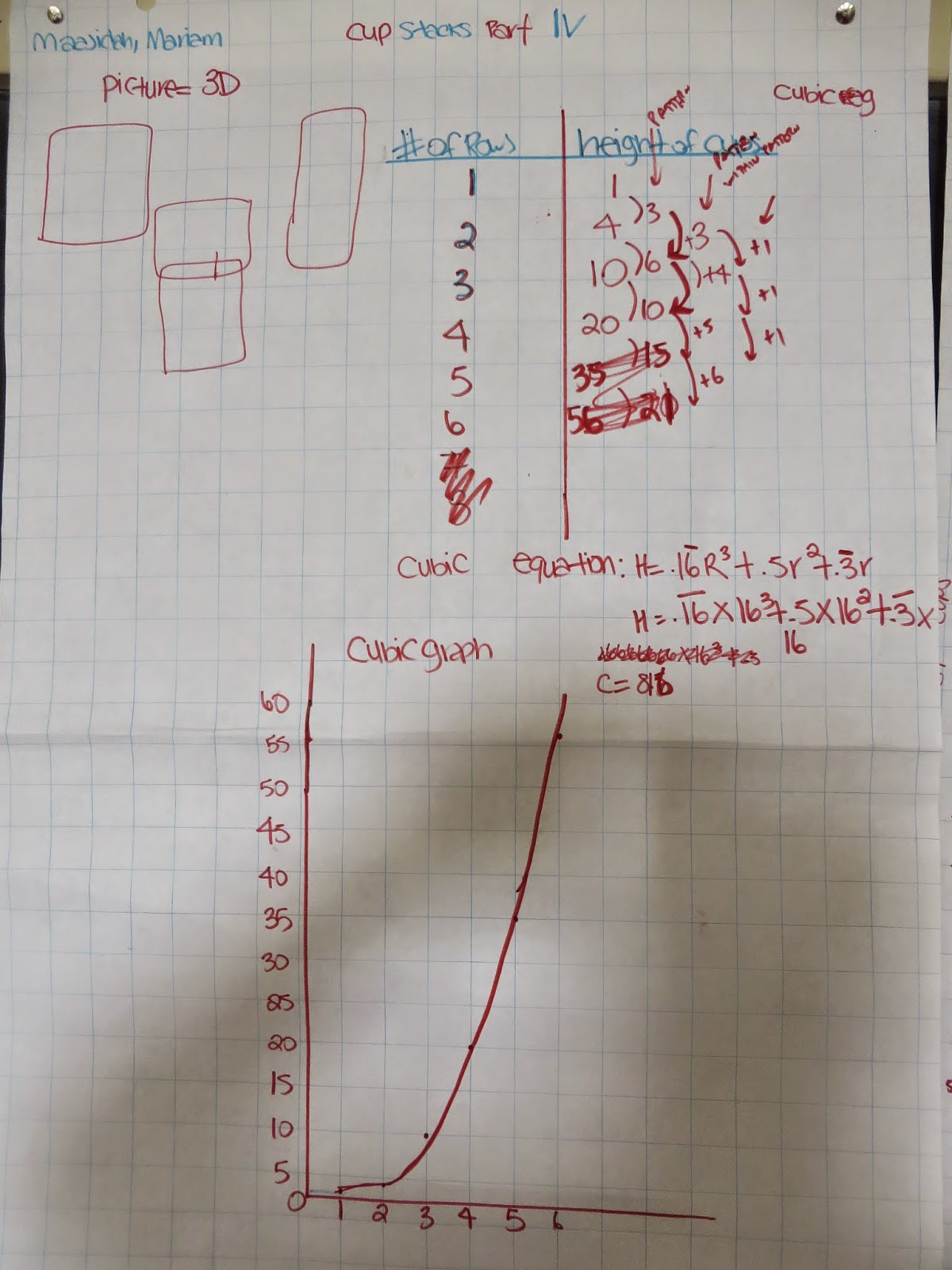 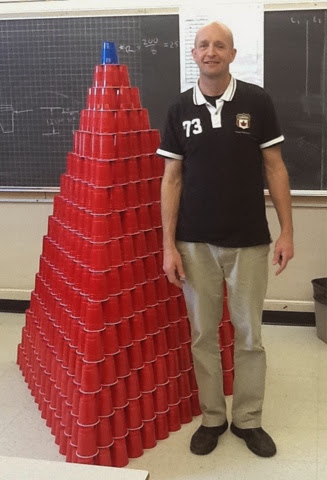 This most recent semester a particular group looked at a method I'll call 2 then 1 bottom top bottom top. Of course they wanted to know if it was quadratic or linear. I told them to do both, figure out how many cups for each and then build it to see which model was better. It took 24 cups to reach my height. 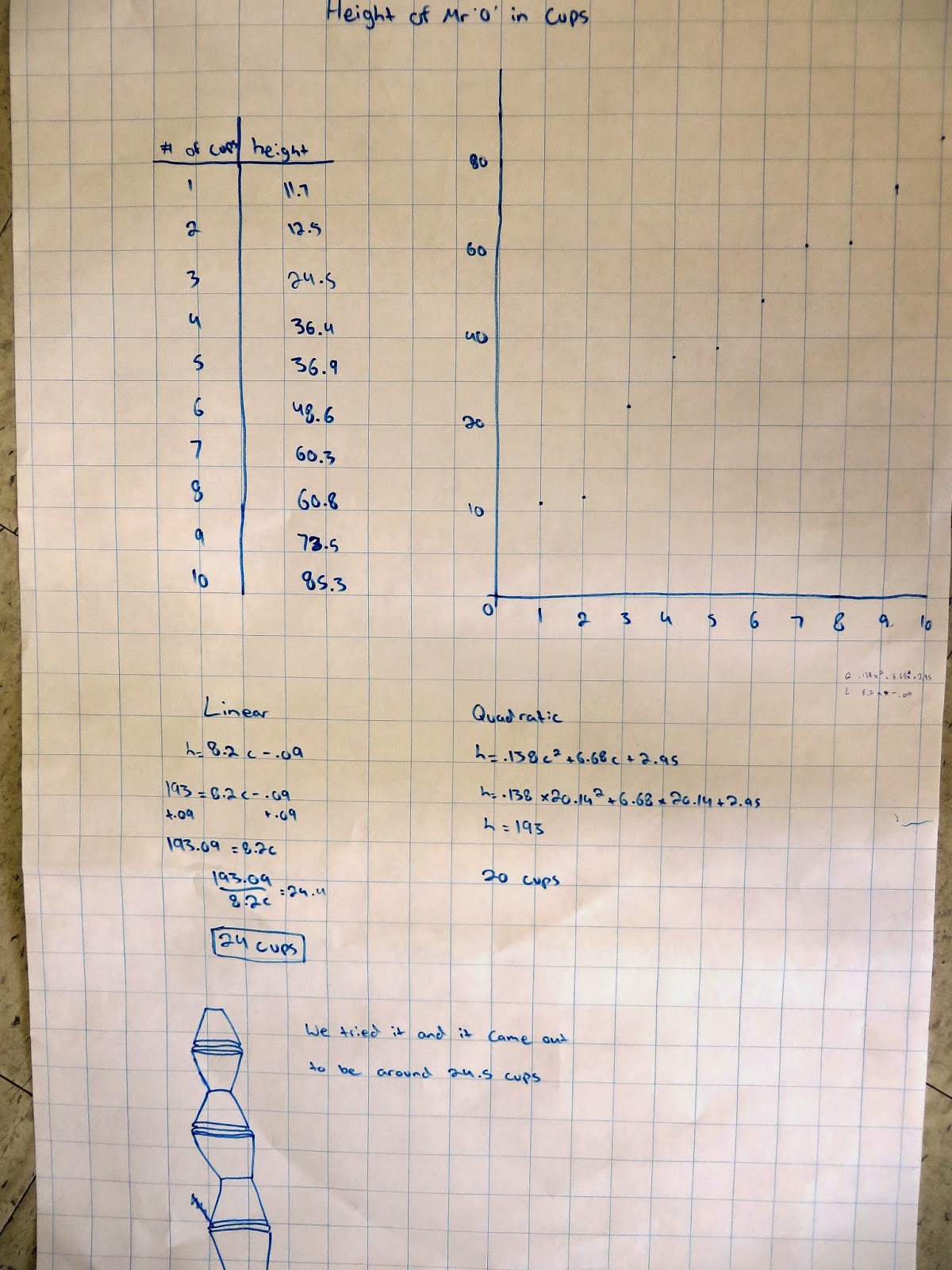 During this last semester I worked hard at posting student work (anchor charts) around the room.
Here is the top bottom wall. 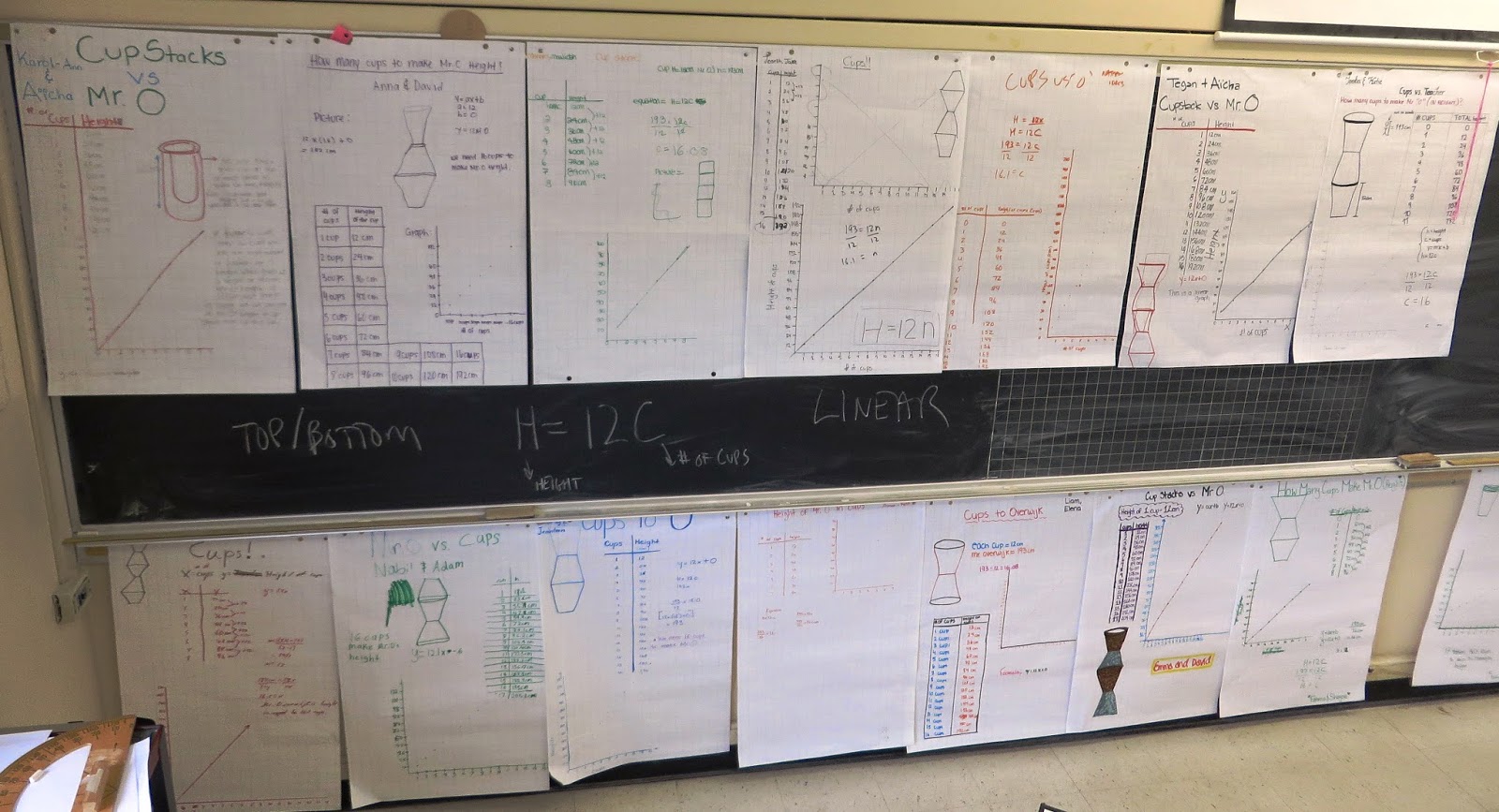 ﻿
Here is the inside each other wall. 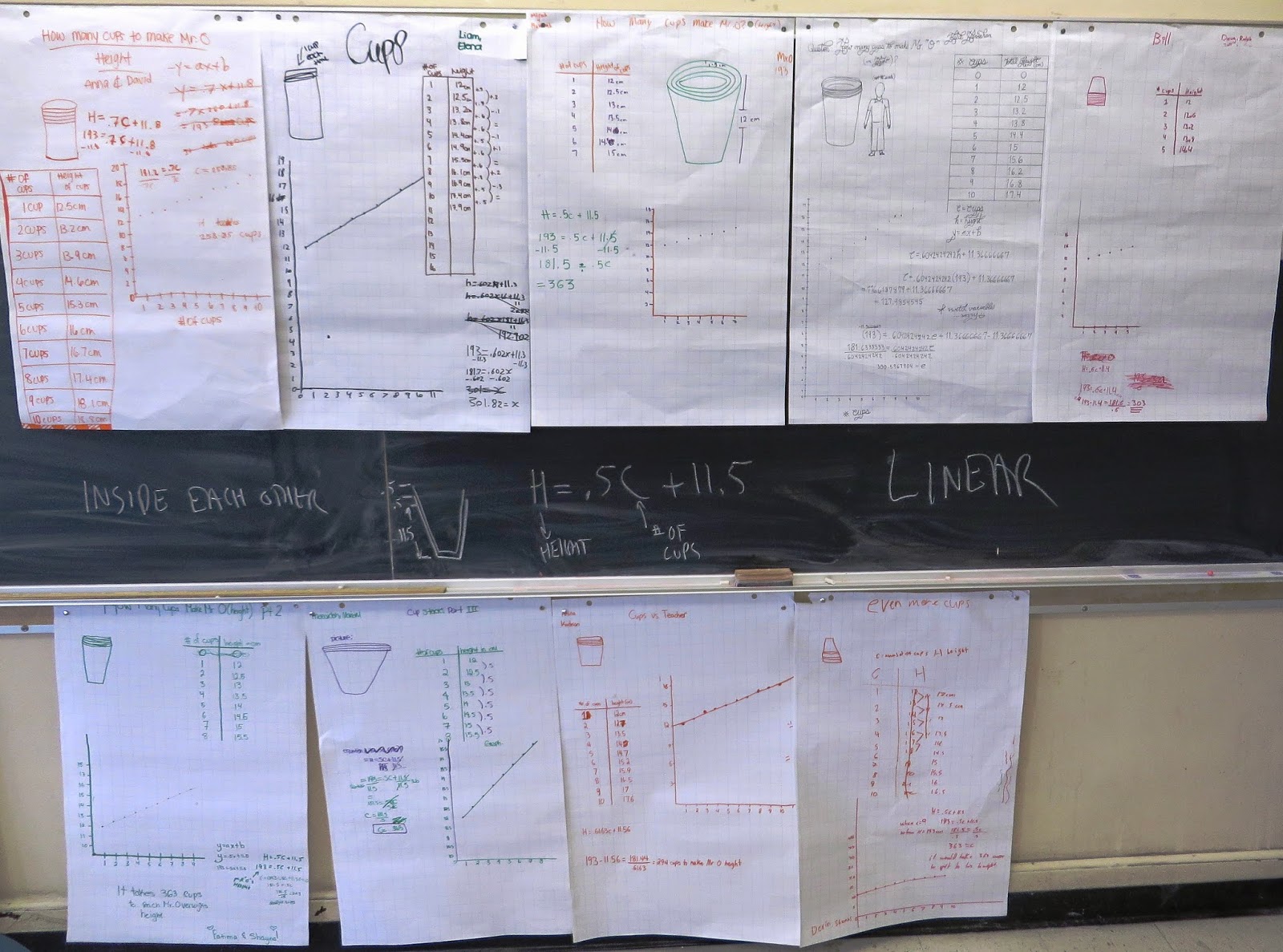 ﻿
Here is the triangle wall. 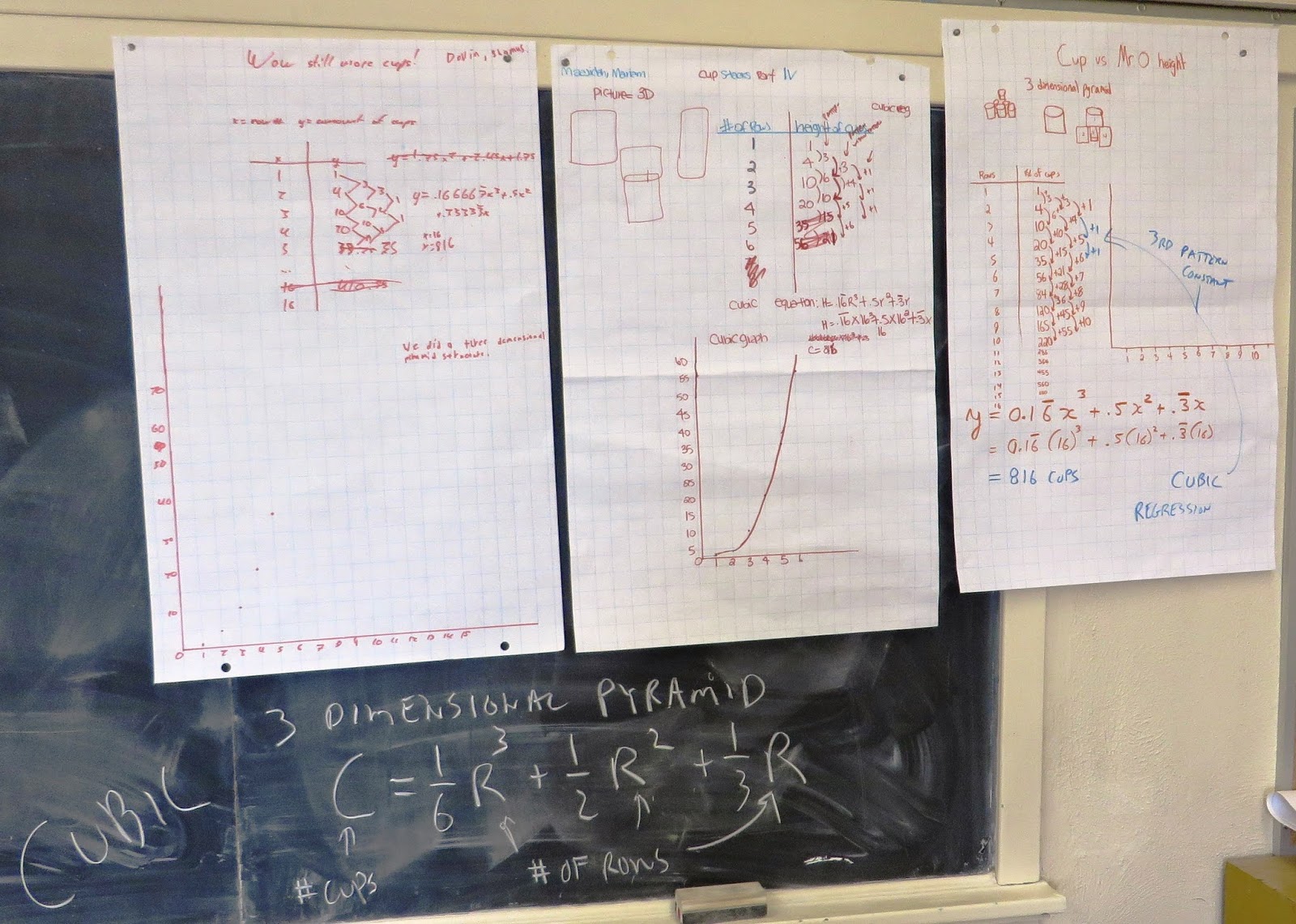 I love this activity. The students really connect a table of values, a graph and an equation. There is an entry point for every student.
﻿
Posted by Alex Overwijk at 6:03 PM 4 comments:

PEDAGOGY
There are many pedagogical moves in this lesson that I tried for the first time. Bare with me.

First after hearing Peter Liljedahl and Michael Pruner talk at the Canadian Mathematics Educators Forum I tried this lesson with visible random groupings (VRG) of size three and the students did their work on vertical non-permanent surfaces (VNPS). These are two ideas that Peter and Michael presented at CMEF 14 that I thought made sense and could transform my teaching.

Vertical non-permanent surfaces. Non-Permanent allows students to make mistakes and take risks when working on a problem or activity. Vertical makes the work visible for all to see. Knowledge can easily be shared around the room. One pen / marker / chalk - person writing cannot write their own thoughts. Hopefully this will help with collaboration within the classroom.

More about VRG and VNPS at another post. (I think these two ideas are awesome!!!)

THE IDEA
Shout out to my buds in the Limestone District School Board who triggered the idea for this activity. I would not of thought of it without them. Great idea. Hopefully they like what I did with it. 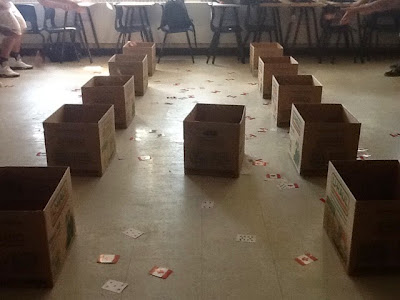 On the first day students folded up their box and grabbed  some cards. We tossed cards for 30 second intervals and counted how many we made from 4 feet (this was an easy distance to choose as the tiles on the floor were one foot by one foot-next time I think I will make it 5 feet- 4 feet might of been a little too close). Students recorded their data and near the end of the period calculated their rate in cards per second.
﻿
Here is my chart: 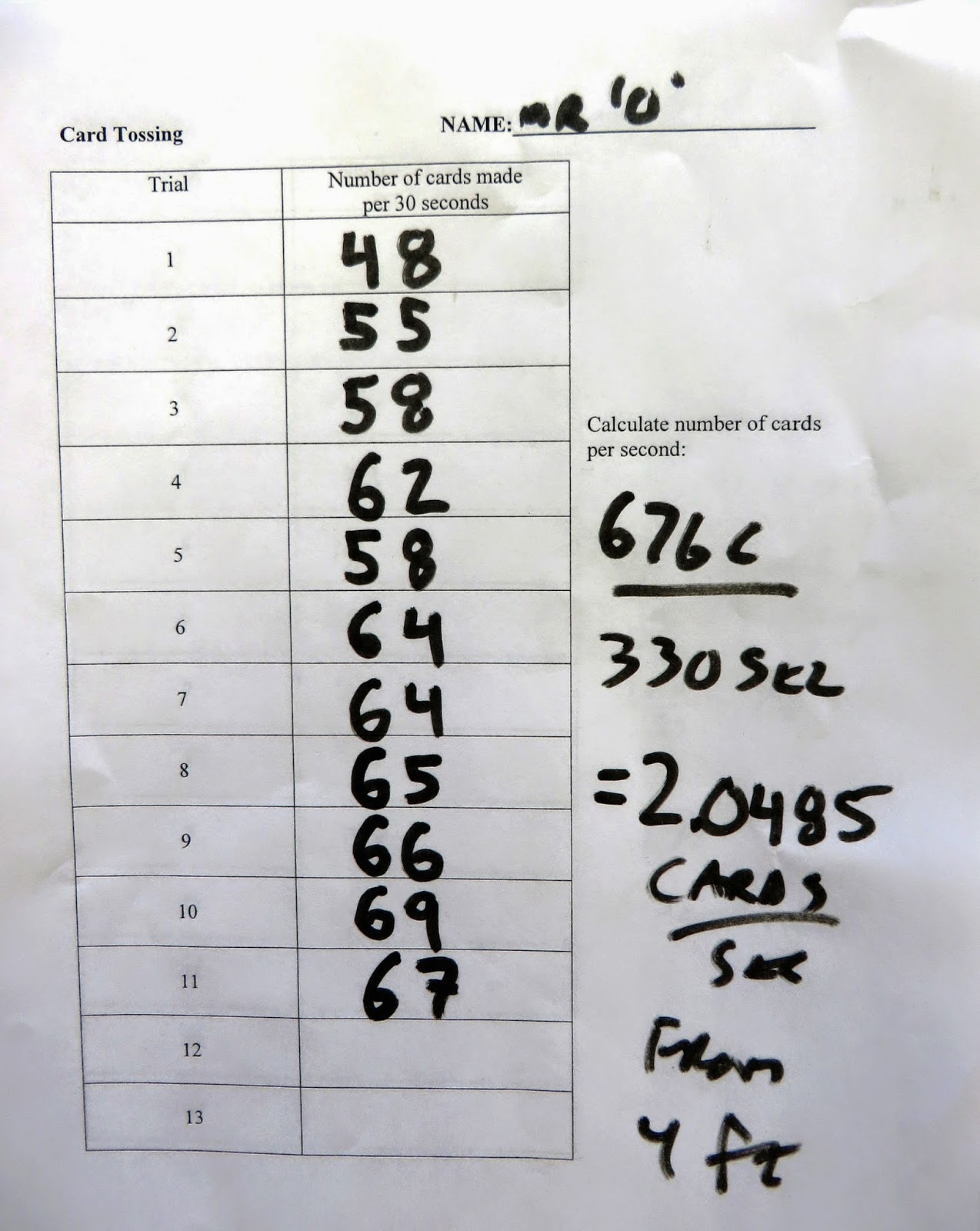 After school I calculated a reasonable card advantage I would give each student depending on their rate so that a game against me would take anywhere from 30-45 seconds.

DAY 2
What is the longest game you could play against Mr. O and still win the game given a certain number of cards advantage? (as stated above depending on your rate)

Students came into class and experienced visible random groupings for the first time. We then huddled up and I set up two boxes at four feet and asked for a volunteer.

Me: "Ok my rate of making cards is 2.05 cards per second and Nabil's rate is 0.84 cards per second. If we have a card tossing competition (Oh Oh could I possibly be World Card Tossing Champion!!! WCTC?) how long does the game need to be for me to win?"

We do this and I clearly win.

Me: "Ok so how could we give Nabil an advantage?

Nabil: "Why don't you move back. Throw from further."

Me: "Ok that would be an advantage but....I didn't collect my rate from that distance."

Me: "Any other suggestions for an advantage?"

I walk over to his empty box. Count 30 cards in front of the students and dump them in.

Class: "Oh ya. That would be a huge advantage."

Nabil and I stand back getting ready to toss.

Me: "So now there is a length of game where I would catch up to Nabil but not quite beat him. In other words - there is time for the game for Nabil to win but Mr. O would be super close. The fans would be going wild!"

The class totally gets it.

At this point the groups are sent to their vertical non-permanent services. They are instructed to use the person's rate in their group who is the best card tosser. I come around and tell each group their card advantage. I ask them to figure out the length of time for the competition so that it will be super exciting.

Here are some pictures of some group's work: 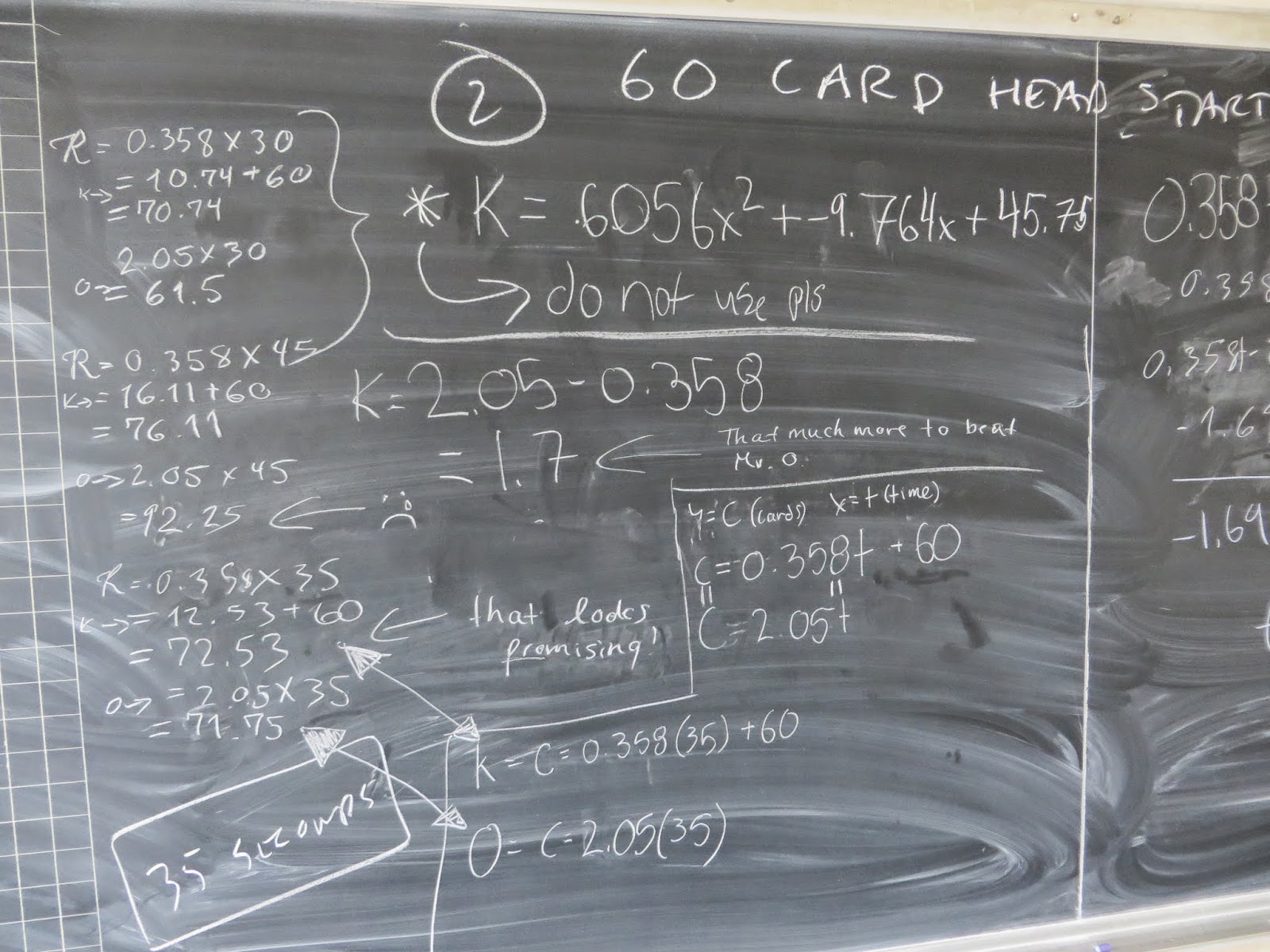 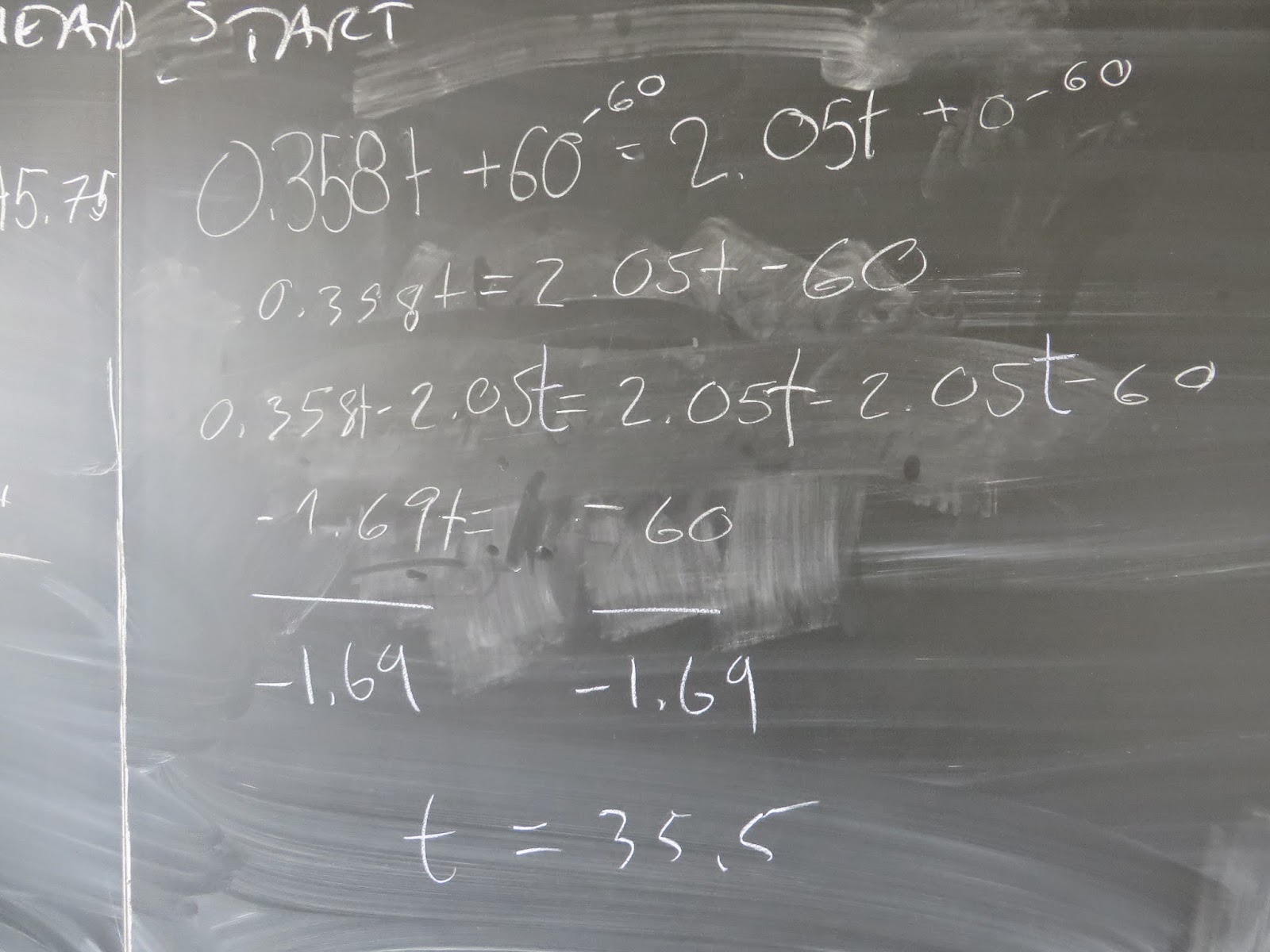 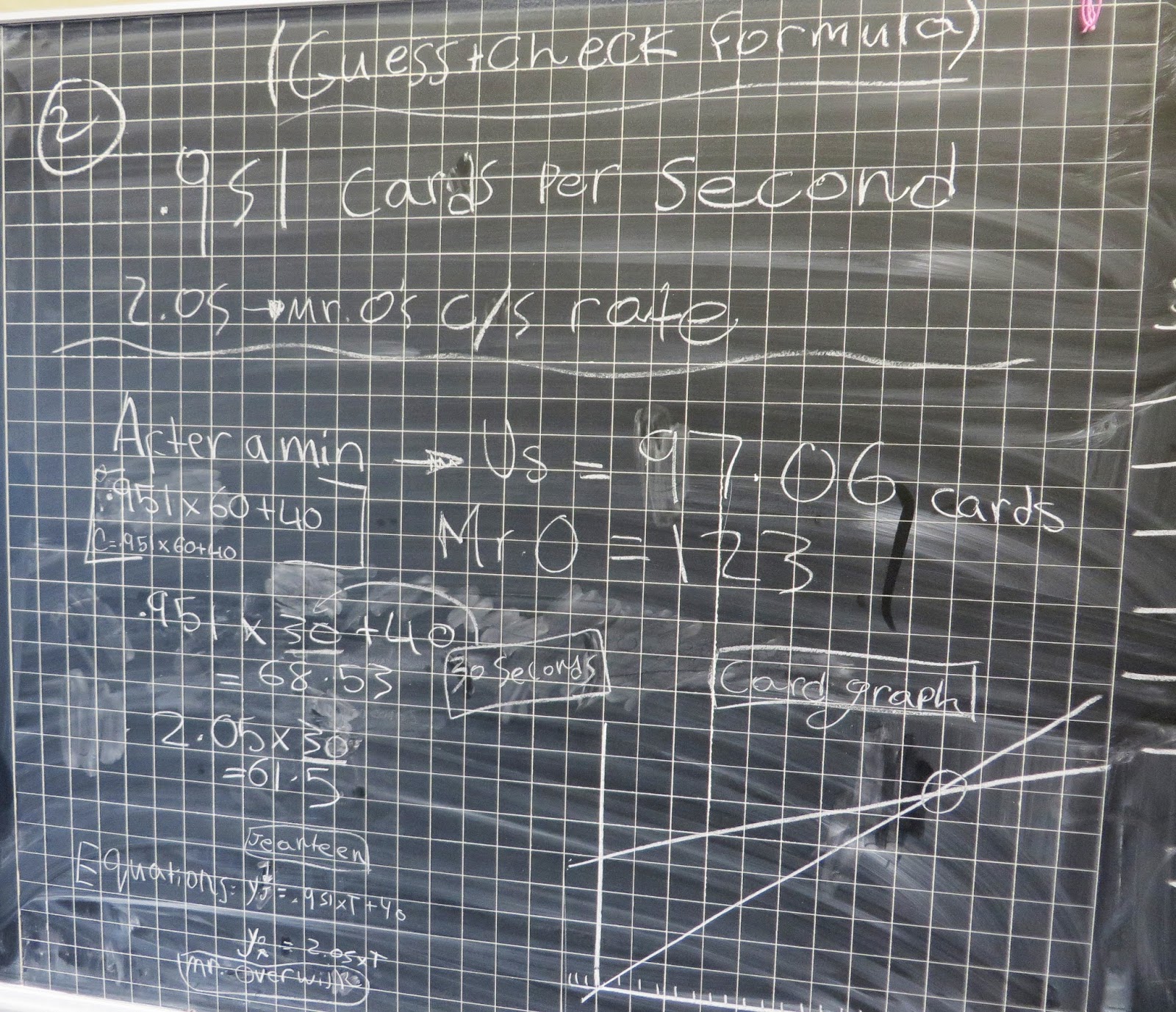 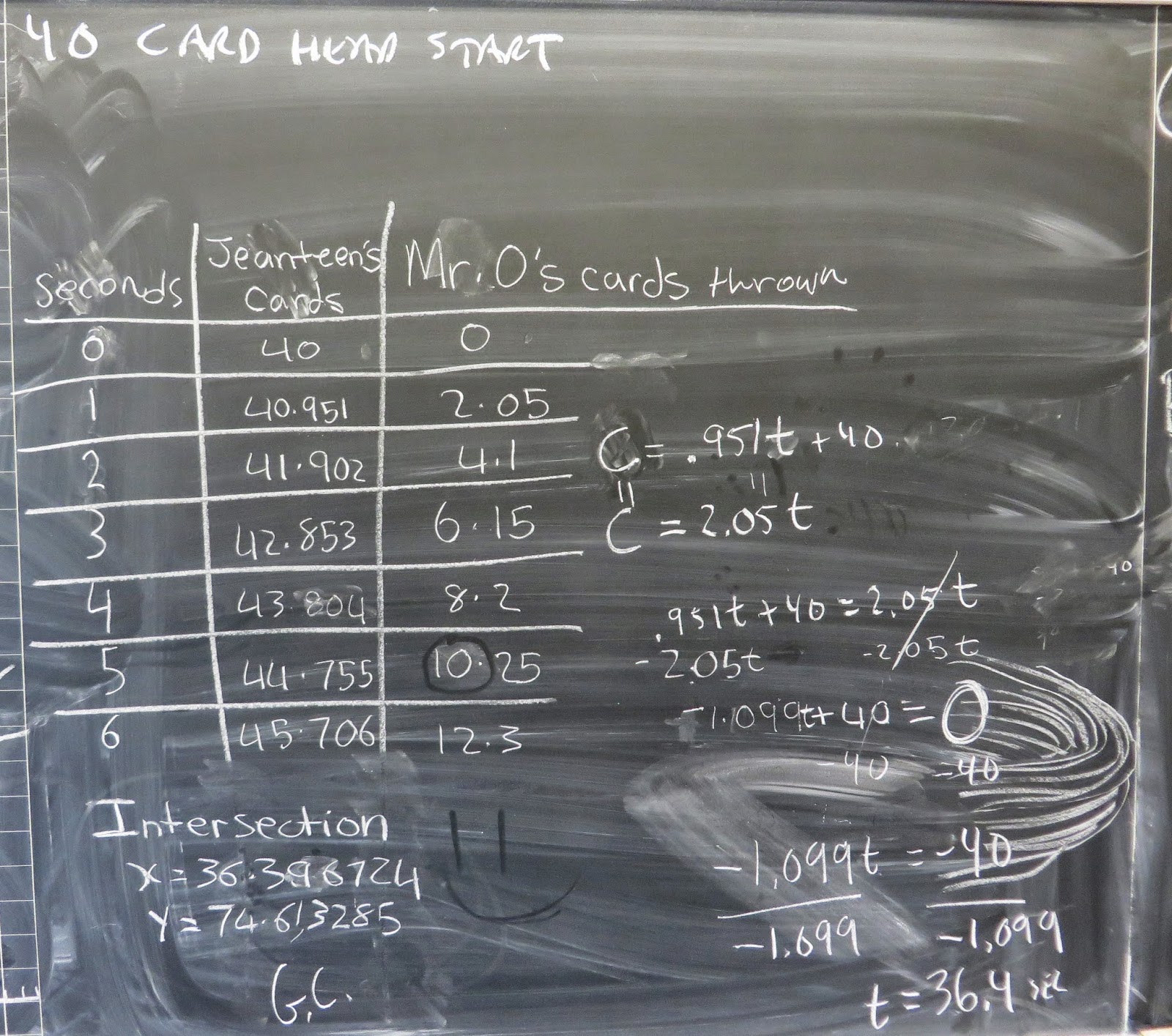 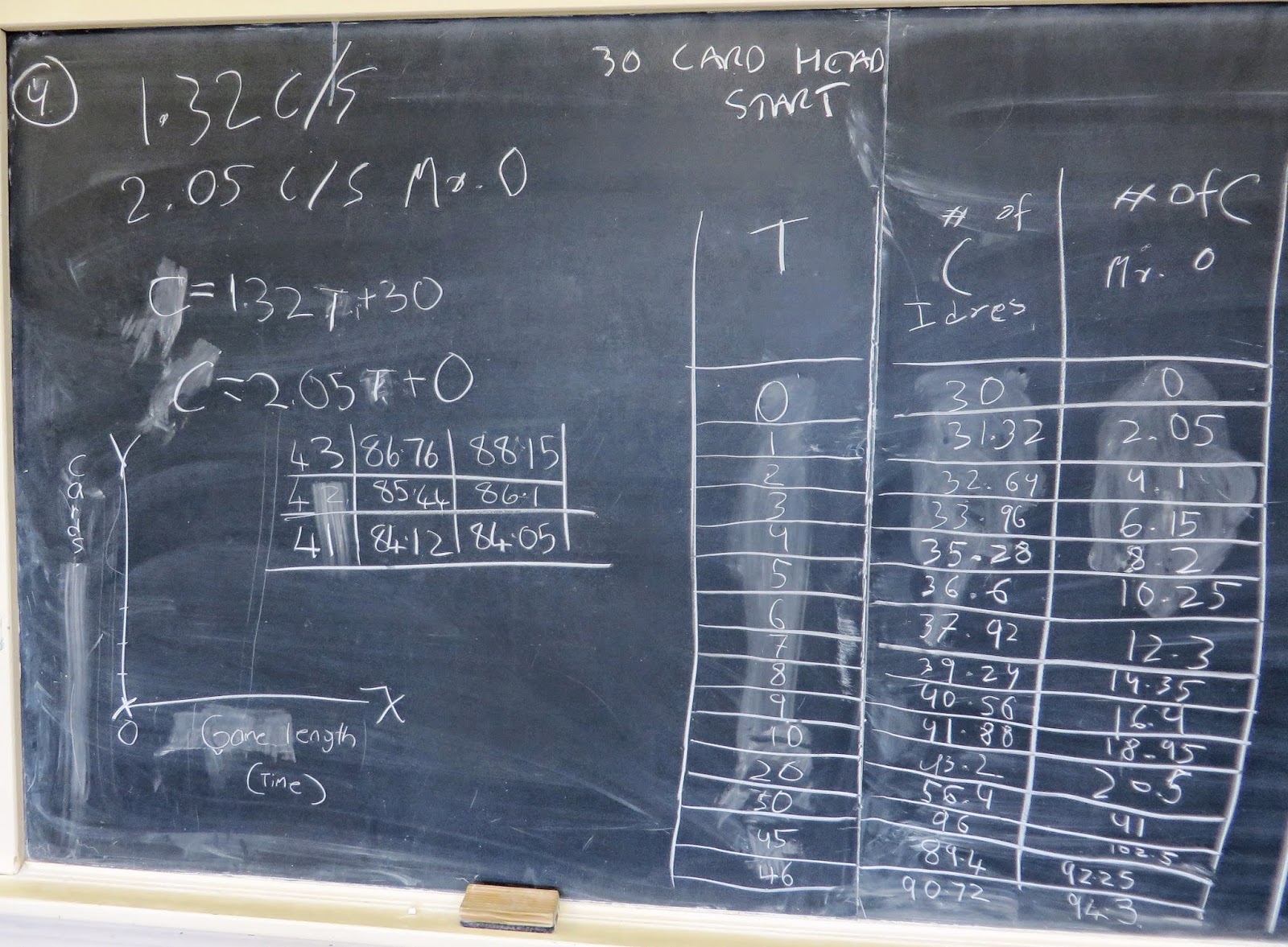 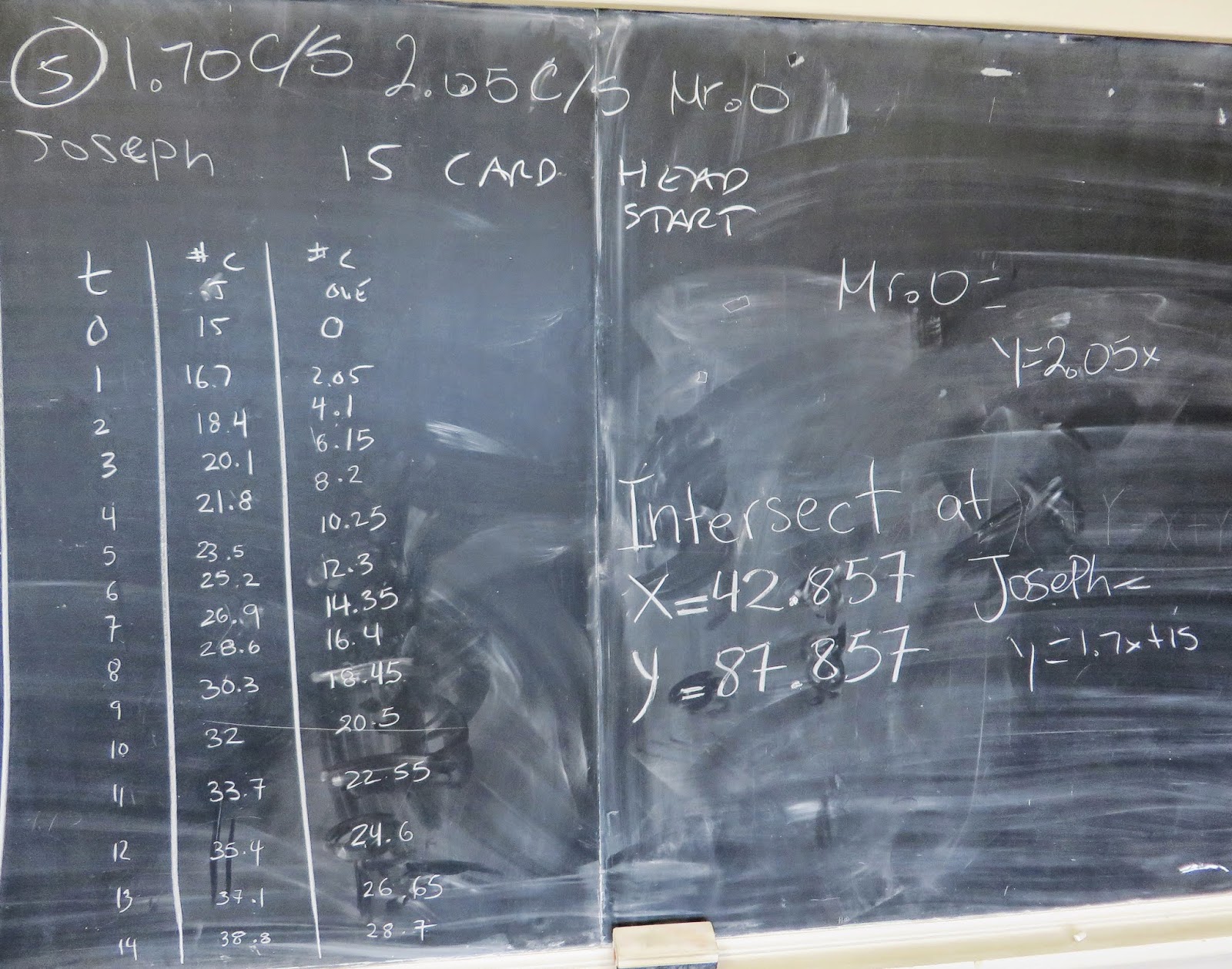 Group's worked on this problem for the entire period. Engagement was awesome. Using vertical non-permanent surfaces allowed me to quickly assess where groups were at and help them move forward. Most groups attacked the task with trial and error at first. I would then prompt them to use a graph, equations and the graphing calculator, or an algebraic approach. Knowledge passed around the room from group to group - a huge advantage to using vertical non-permanent surfaces.

Groups were asked to go back to their vertical boards from yesterday and put up an algebraic solution to the problem. Here is an example: 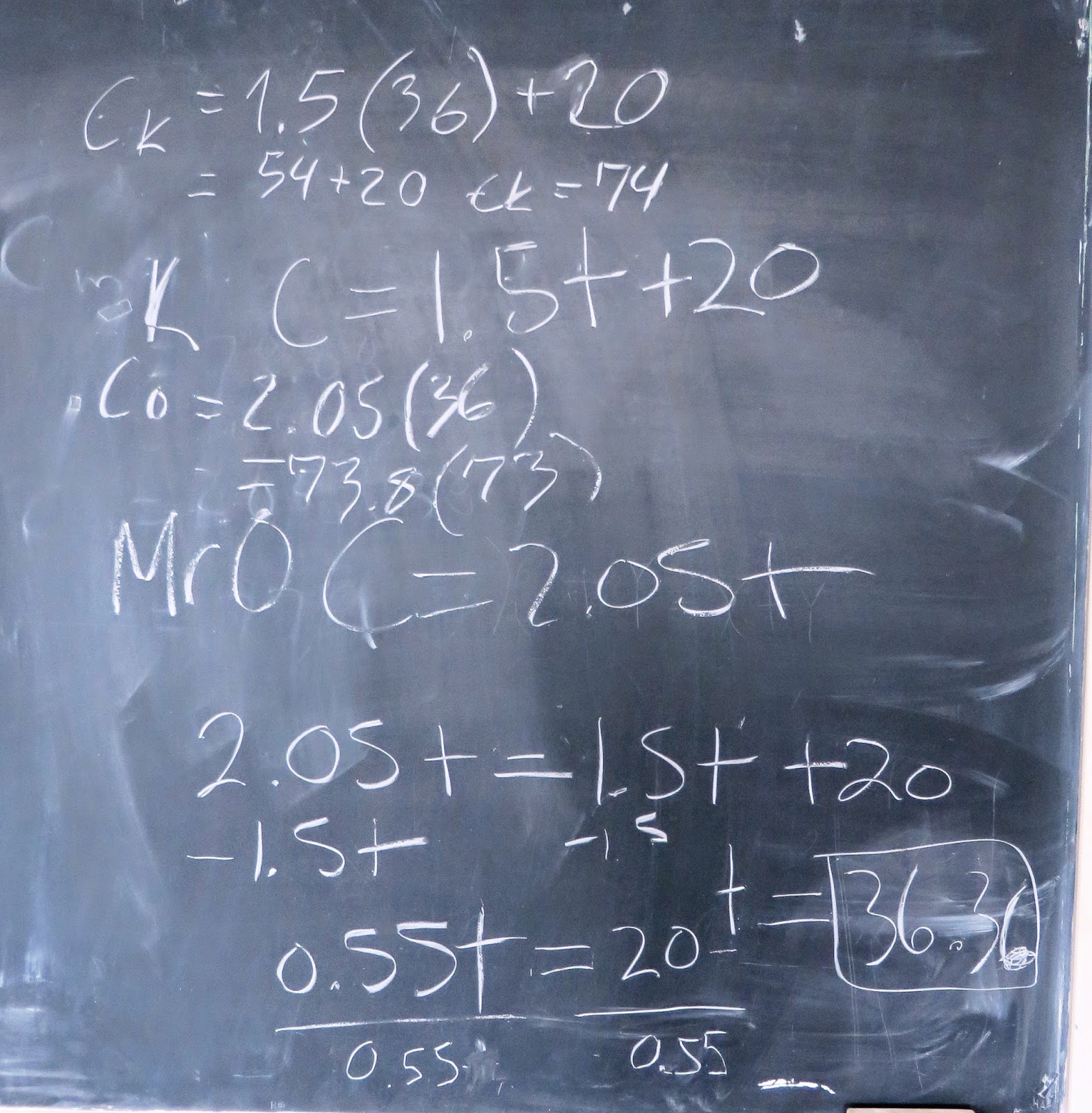 Once all groups had a length of time for the game to be close and the number of cards we could expect in the box, we found a time keeper and played our matches.

Here is a head start: 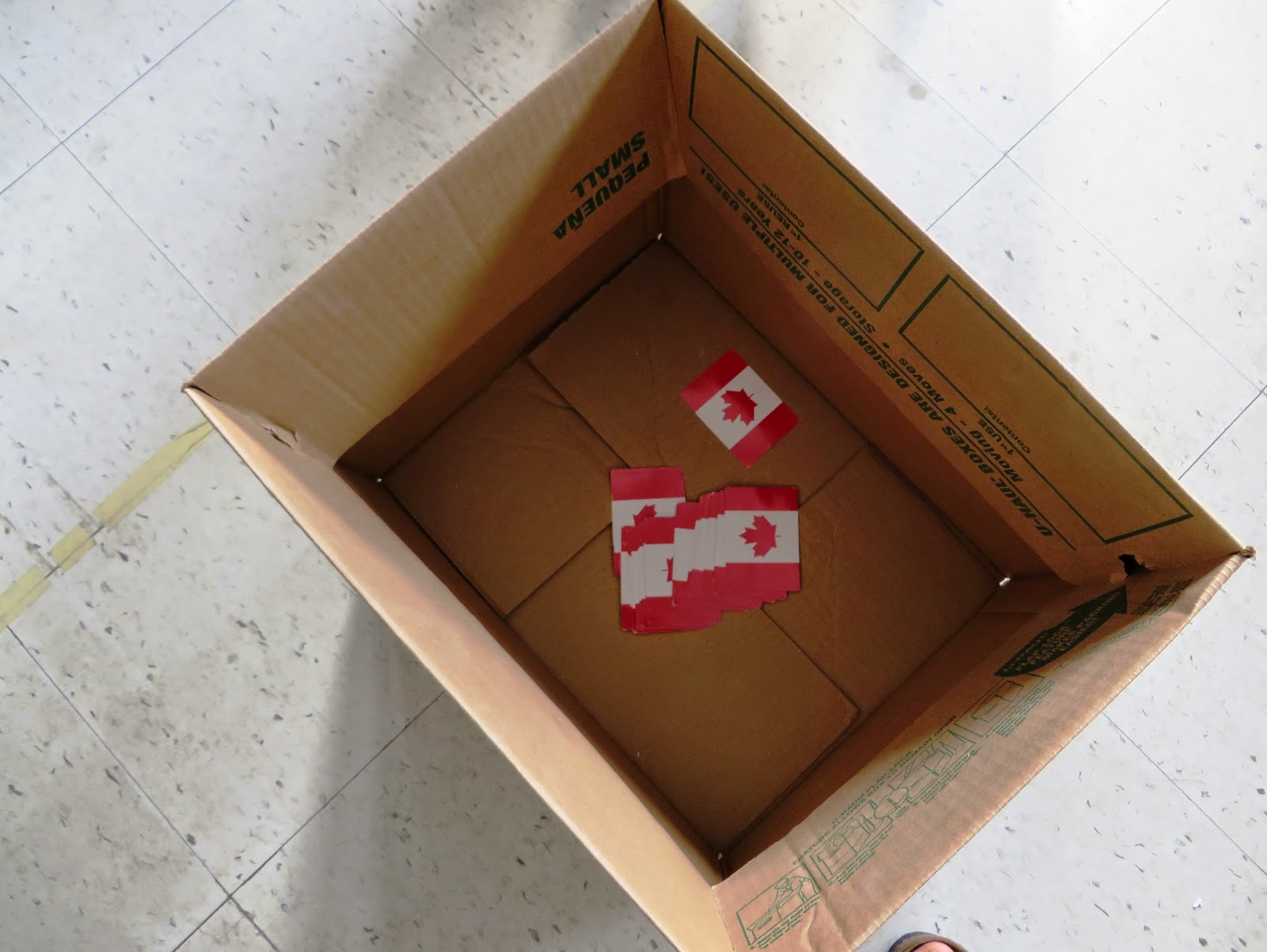 And here is a video of me versus one of the students.﻿
﻿

The results were awesome. We played games to the length of time the students predicted with their models and then compared the number of actual cards in the boxes compared to the expected number of cards.

My first period class had these results: 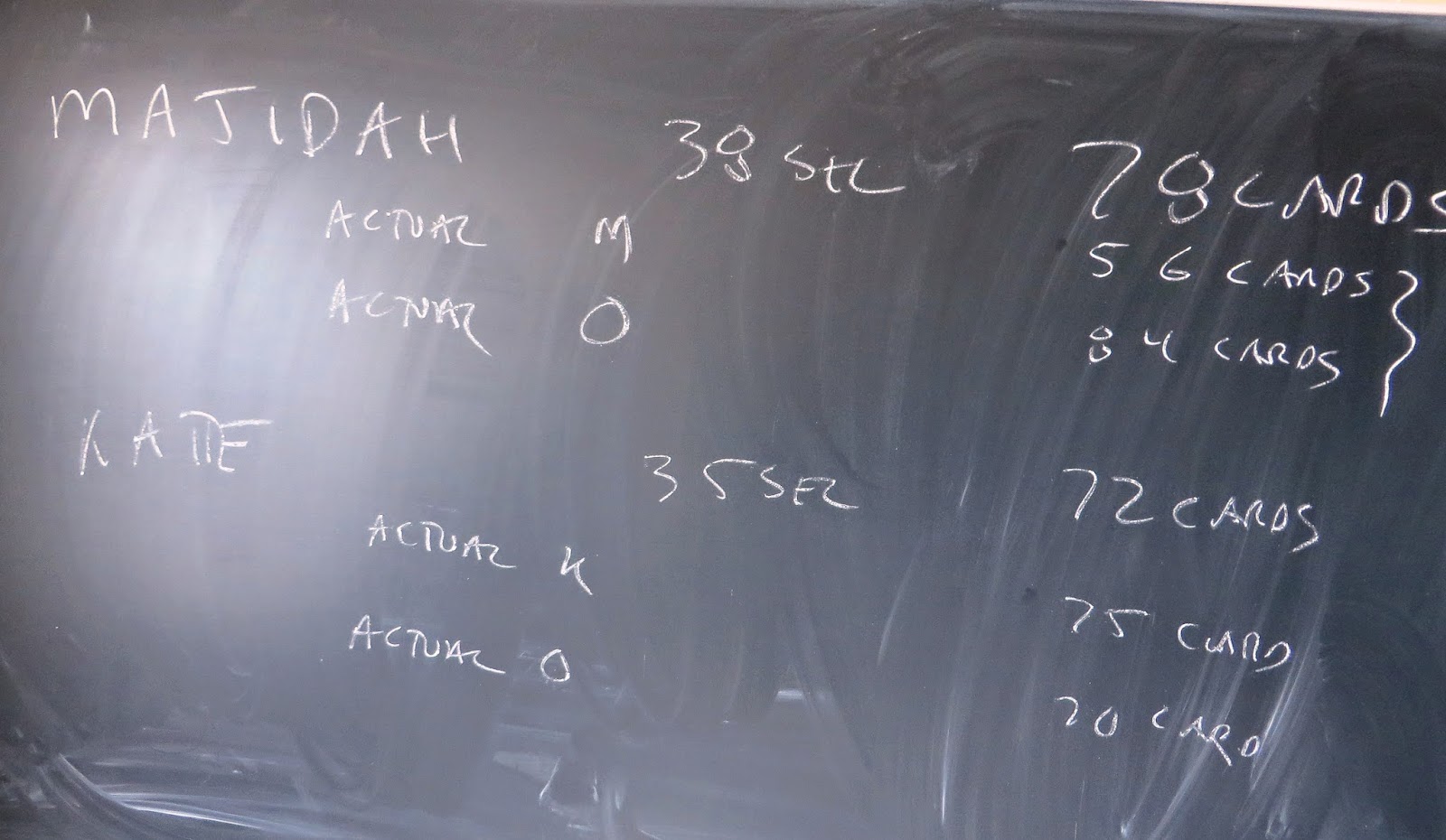 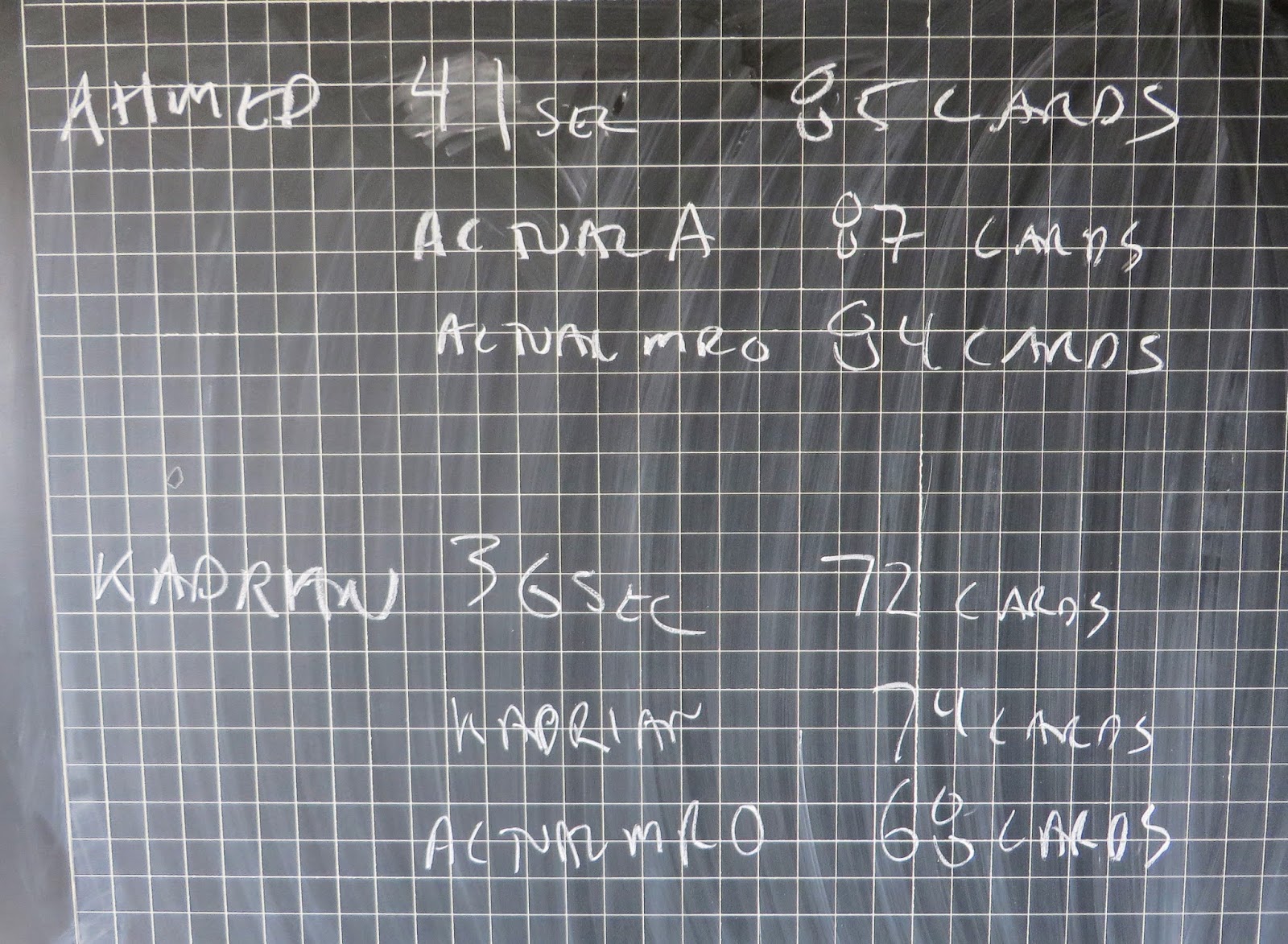 And my afternoon class had these results: 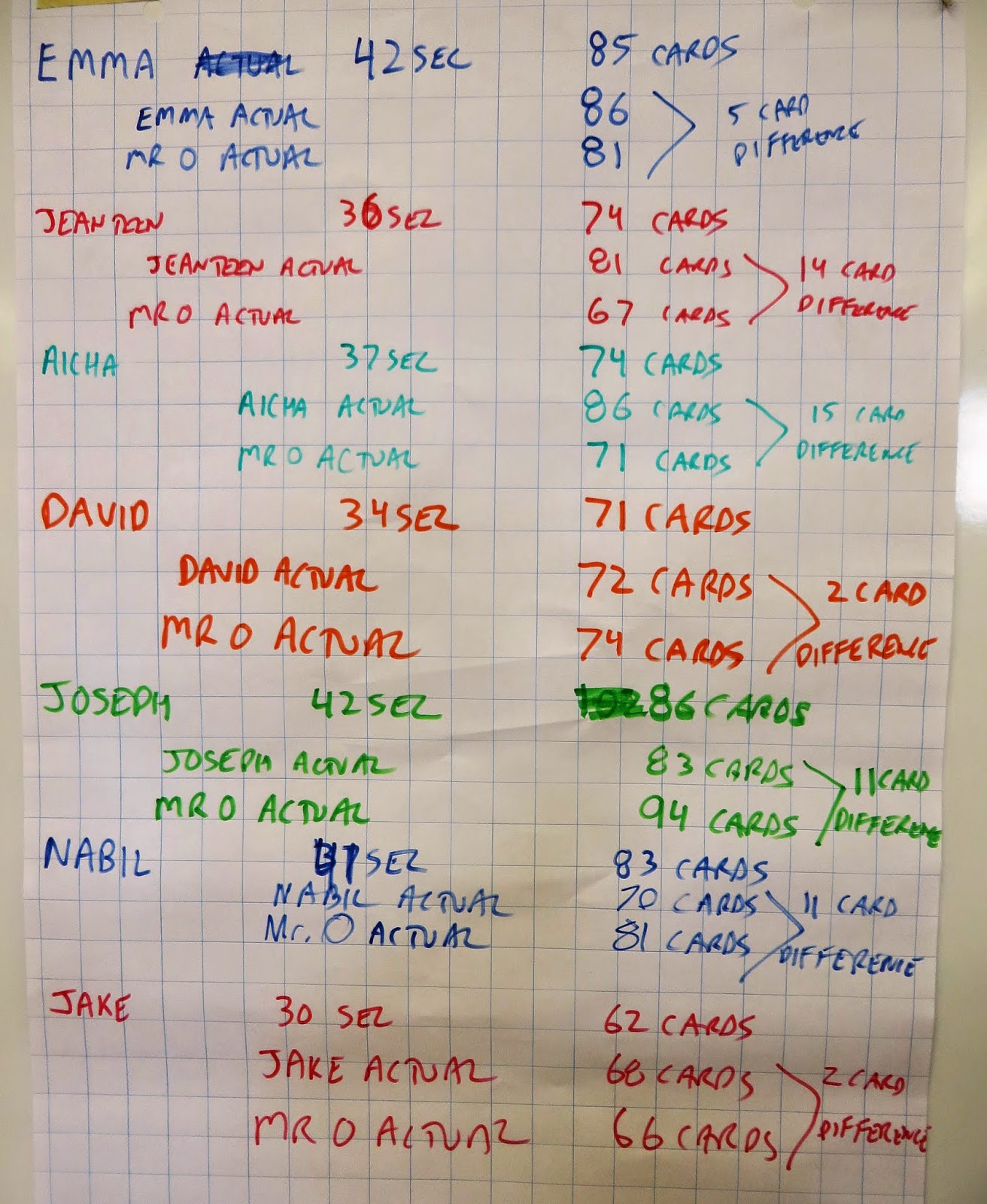 THIS ACTIVITY WAS AWESOME!