Disclaimer
This one has been around for a while and I don't know where I saw it first. But thanks. And thanks to the #MTBoS

Students worked with a partner on this one. They were given a measuring tape and 10 beer cups and 10 styrofoam cups. Here is what I wrote on the board.

Some groups picked up one styrofoam cup measured the lip, used that for m (slope) and the distance to the lip as b (y intercept). For the plastic cups they placed one inside the other measured the increase in height and used that for m and subtracted that m from the height of the cup to get b. Not a bad strategy but a small error in measuring creates an inaccurate answer.

Other groups made measurements for 1, 2, 3, ...., 10 cups and made a table of values for each stack ( one cup = 12 cm, 2 cups = 12.5 cm etc....). They then put the data into a graphing calculator and did a regression to generate y=mx+b. Good strategy. Some of these groups included the data point 0 cups is 0 cm and of course created inaccurate models.

Other groups had no idea where to start. They couldn't imagine that they could answer the question with only 10 cups of each type. They looked at other groups to see what they were doing. They even went over and asked them - because I was not telling them what to do.

Other groups measured the height of the 10 cups for each stack and then used this to predict. When I visited these groups I just took two stacks of 10 of the same cup and stacked them in front of them. As they watched the stacks slide inside of each other they had their aha moment.

I circulated and tried to get all groups moving in the right direction.

Once groups had the models they solved the question in a variety of ways.

Some used the graphing calculator with all the usual problems. How do I find where they meet? How come I can't see both lines? Some of these groups, once they had the point of intersection, could not articulate what it meant.

Other groups used the equations and solved for the point of intersection algebraically. Some of these groups needed help with this.


Others just found the number of cups and not the height.

Other groups decided to just extend their tables until the heights got close to the same. I explained to these groups the inefficiency of this strategy.

Here are the results: 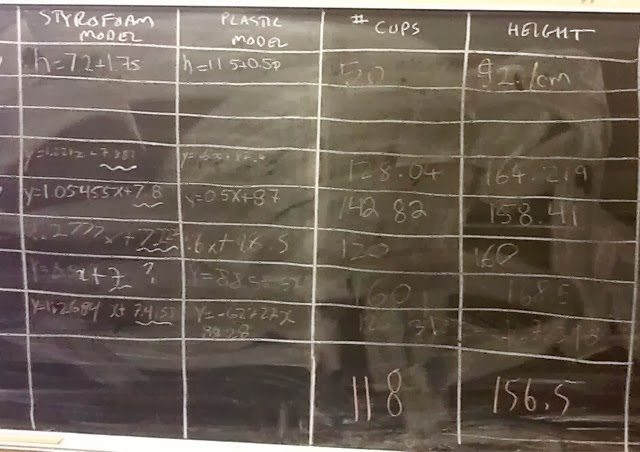 The actual solution is on the bottom line.