With all the great stuff happening with number lines around the #MTBoS, I thought it might be an interesting idea to bring to our cross curricular lesson study group in first semester of this year (2015-16). The original lesson was designed for a 75 minute period. I just repeated this lesson again this semester with two classes of grade 10 applied's but carried it over two periods. This was much more manageable than the original lesson which was done in one period and that felt very rushed.

Kudos goes to Robin McAteer (@robintg) for the original idea which I experienced at a summer math camp for teachers in Barrie Ontario a few years back. I specifically asked Robin to join in this lesson study (she is an instructional coach at our board - and I am a huge fan) as I thought she would have some great insights (as she always does). Also, as always, Robin documented our debrief and summarized the exit cards. You really can thank her for the depth of this post.

This particular lesson study was a bit different. Let me tell you why. Normally we would plan a lesson one week and then the following week deliver and debrief. This particular lesson was planned on the afternoon of January 7th, 2016 to be delivered on the morning of January 8th, 2016. The reason being that we had a guest coming from LA to join us for the two days. Judith Keeney (@JudithKeeney) whom I met at a session she presented on at #TMC14 in Oklahoma on lesson study (and hit it off with by the way) was interested in joining us to observe and participate in a lesson study at our school. 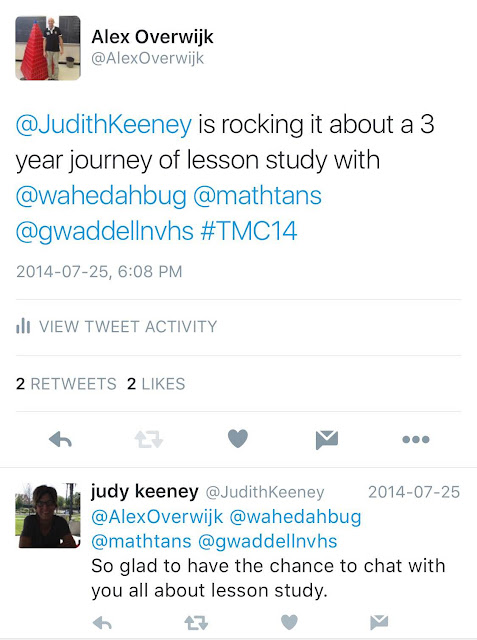 The two of us had discussed this at NCTM in Boston in April 2015 and it became a reality. I am so glad she was able to experience our group and visit my classroom and experience all that we try to do at Glebe Collegiate. Plus her insights were awesome.

This presented a slight challenge as the lesson had to be done by the end of the first day, including any classroom set up. That being said I had an idea of what the lesson would look like before the meeting ( so..... unfortunately our group did not really feel like they had ownership of this lesson). None the less something cool did happen. Normally we would talk for a whole afternoon and then the teacher delivering the lesson the following week would iron out the details and set up the classroom for the lesson on their own. This time though we planned for about half the afternoon and then we all went to my classroom to set up the physical learning environment. OK something cool happened - not sure how to describe it- because we were just chipping in on the set up we started bantering a little. Lot's of jokes, pokes and other things. There was something about setting up the lesson together not just planning it together. A real sense of team - hard to describe. Lot's of talk the next day as to how to incorporate the set up as a group as part of our lesson study model. Of course here we are 6 months later and we have not managed to do this (would cost more $$$), but it is on the back burner.

Anyhow can't even start to thank both Robin and Judy enough as well as all our team members from first semester - it was a unique experience.


Here is the planning document for the lesson. 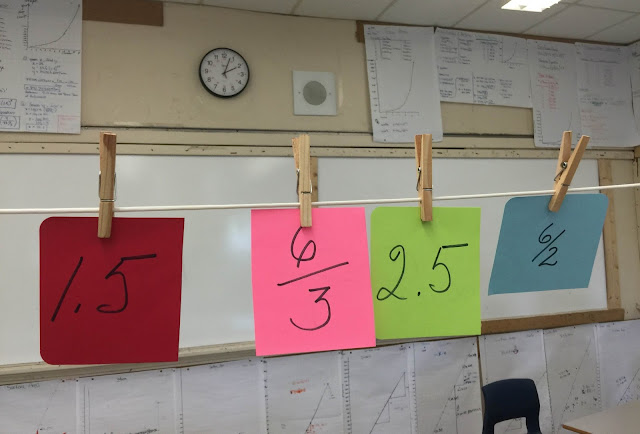 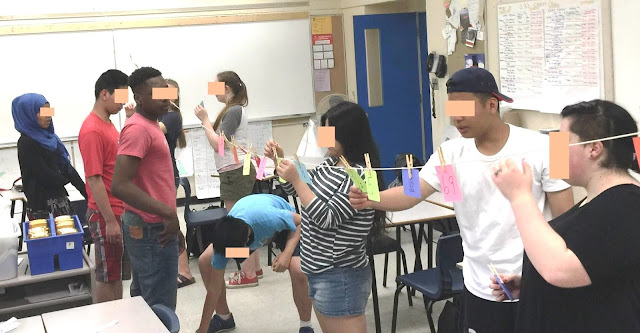 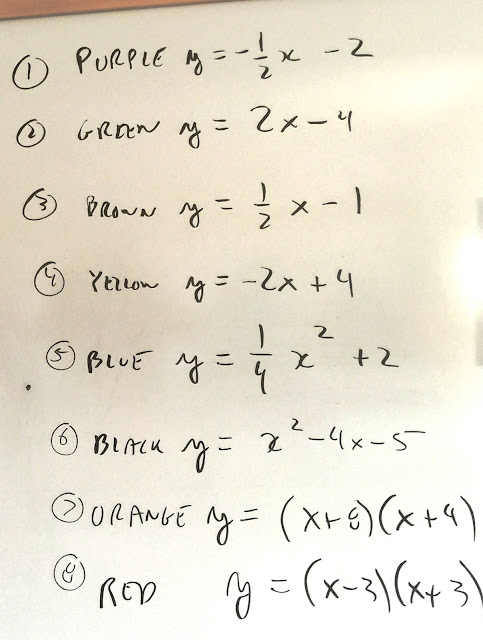 Here is some groups work calculating the values for all 8 equations using their given x value. We spent a period getting all the number lines together this most recent semester. (21 in total from -10 to 10) 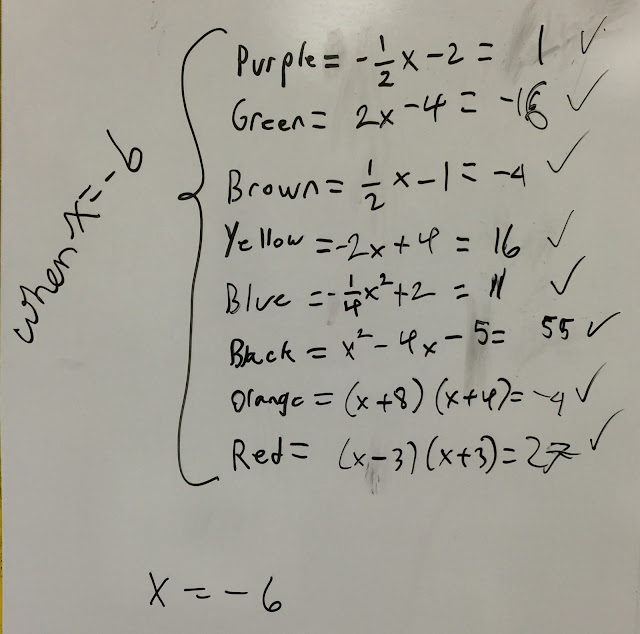 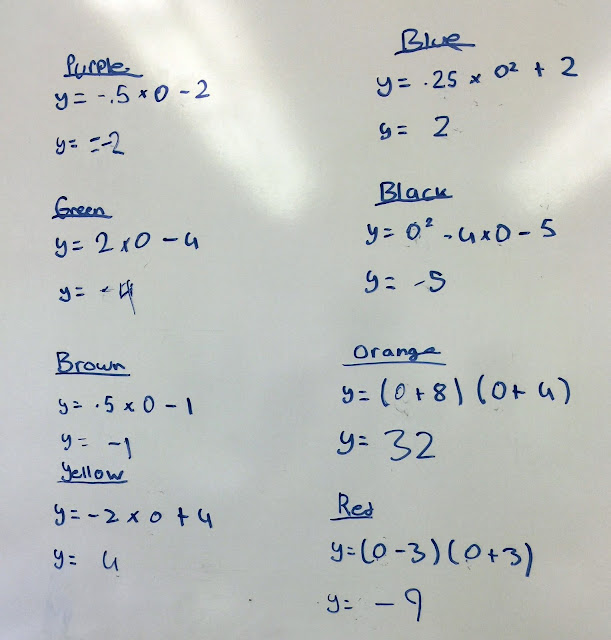 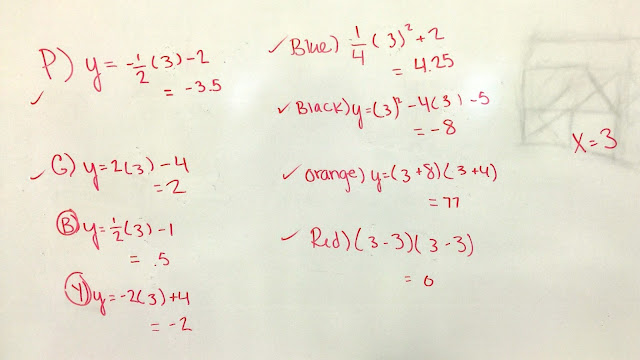 Once students had the y values correct for their given x value they would place the appropriately coloured dot on the number line if it landed between -10 and +10. By the end of the period the class had produced the 21 number lines.

At the start of the next day I asked if anyone could tell me what we did yesterday.
S "We placed dots on number lines"
Me "Where did the numbers come from?"
S "We had 8 equations and an x value and we placed the y values on the line based on the colour of the equation."

Me "Ok great. So if we were going to place these from -10 to 10 would they go vertical or horizontal?"

S "They would go vertical because the dots represent the y values for the x value you gave us. The y values are up down."

And there you have it. So with some student help we slowly placed (taped) the 21 number lines. Here is what it looked like. 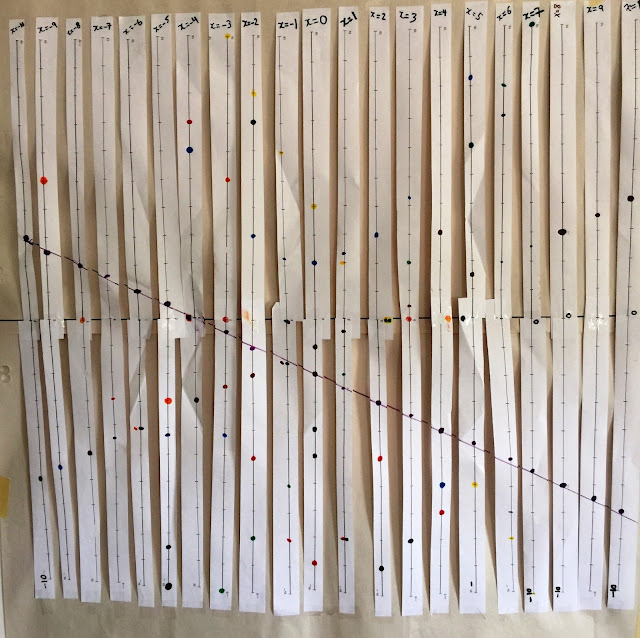 So some dots were in the wrong spot despite me checking their values on the whiteboards. It appeared as though most of the mistakes were groups putting a positive value as a negative value and vice versa. I will say as we put the lines together there were lots of comments like, "Oh we are getting the graphs of those equations!" I think I even heard "Holy S&it."

Here is what it looked like once we connected the coloured dots for the two different classes. 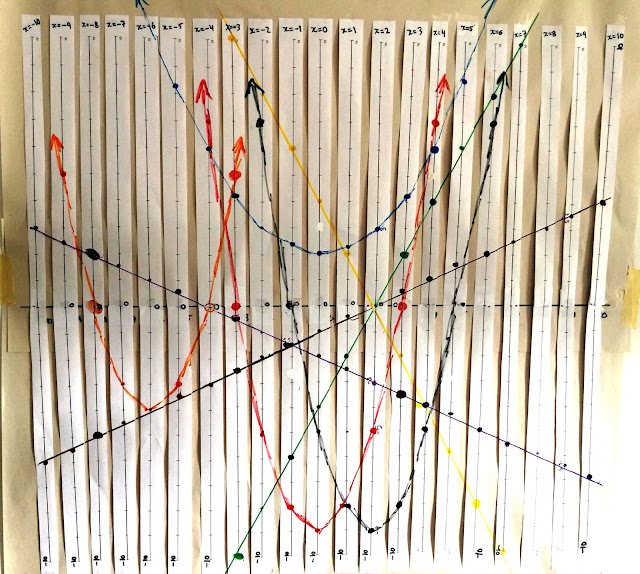 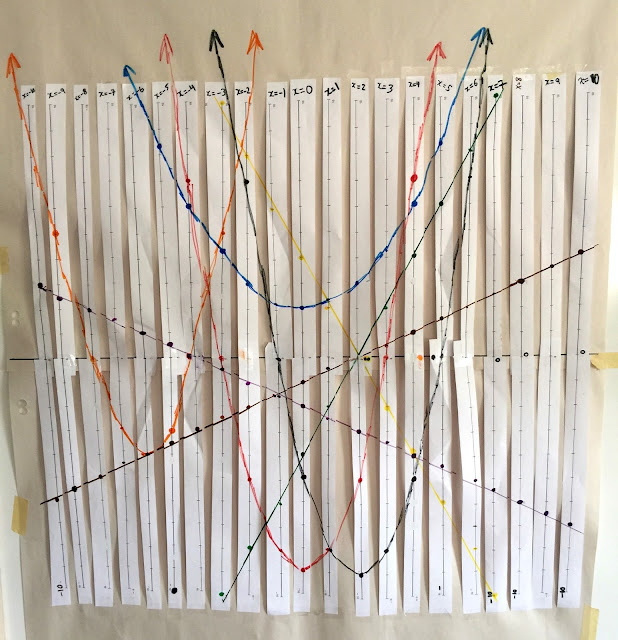 I then asked students to do some characteristic finding for the 8 equations. Once they were done they could go look at the graph and verify their answers. 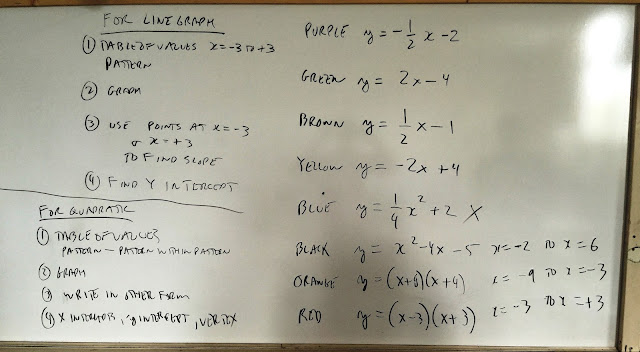 Here is some sample work from groups for one of the linear examples. 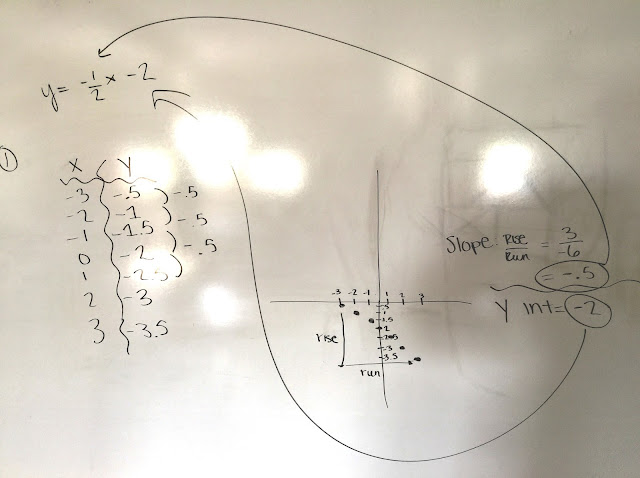 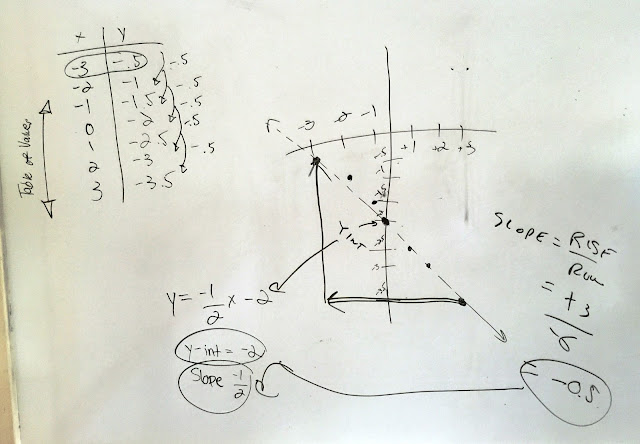 And sample work from a group on a quadratic one. 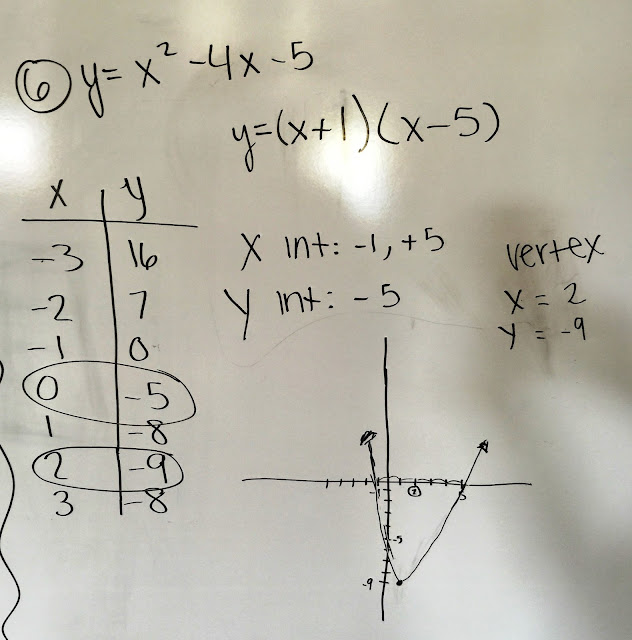 At the end of the activity we asked students to fill in an exit card that looked like this.

We got these results: 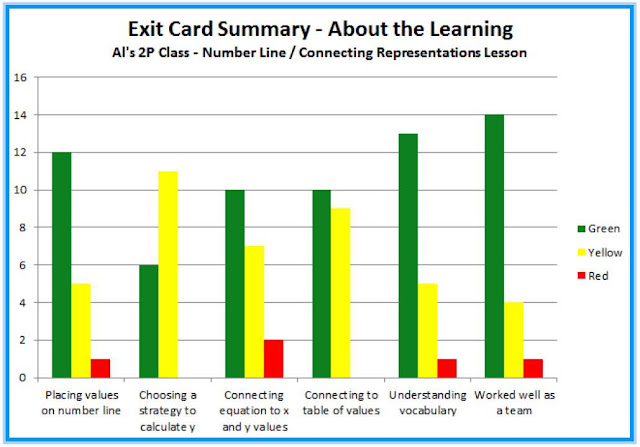 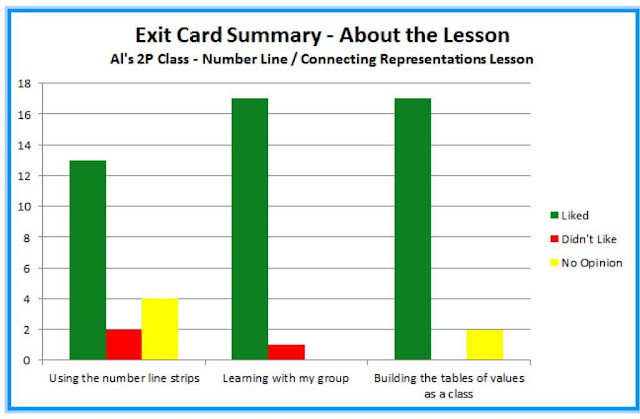 Notes from the lesson study as they happened. (student names deleted - names included are teachers)

Complex detailed lesson
- couldn’t have done it all with one person - would have taken 2 classes
- needed 2 or 3 people walking around checking
- lots of details had to be worked through in the morning
ex. doing up answers for quick checking - checking was time consuming!
Al
France
Robin
Dana
Paula
France
Robin
Al
France
Al asking Judy
Judy
Discussing pros and cons of various timing options

Reflecting on the planning

How important is it for everyone to understand the lesson?

Robin
Student A and Student B

France
Student C, Student D, Student E
Paula - observing same kids
Al / Dana - pros and cons of battles with kids over the phones
Al:  There are 5 or 6 in the class with this problem - decision to battle or preserve the relationship
France:  Would be interesting to follow her around and document phone use as evidence for a phone addiction
Dana:  I don’t think you destroy relationships … they resent it…
Al:  It’s a battle - I know where this ends up - those kids stop coming and you lose them - it’s tough - the energy it takes -
Anneke:  I take ____ phone all the time - I provide a free service to kids by taking their phones from them

Dana:
Student N, Student P, Student Q
Is the process of putting in the numbers helping him?  He’s really just dictating.
Judy
Student R and Student O
- missed negatives and operation signs
- During pauses (ex. waiting for checks) Student R took the calculator and tried to figure it out
- diligence - she was watching what he was doing, then practicing
- The second time they worked through it together in about 5 minutes
- double checked and made adjustments themselves
- Took a long time with the number line - getting the dots coloured in
- Student O was engaged the second time around
- Student R said she liked working with the group - had a positive impact
- Student O didn’t like working with the group - put yellow for worked well with his team

Student T
she’s anxious - she refuses support of a scribe

Robin:  Wondering about the learning of people in groups where there is a large gap in readiness

MY THOUGHTS ON THIS LESSON

1. Loved this creation of the graph. It would be a cool way to introduce the graphs of functions that you will be exploring in a course. For example in MHF4U do a rational, polynomial, exponential, logarithmic, trigonometric. Tons of potential with vertical y value number lines.

2. What about later in courses where students then knew how to solve for x given y. We could give them the y value, they would solve each equation for the x value, put on the coloured dot, and then place the number lines horizontally at the given y value. Again we would be generating the graphs.

Huge thanks to all involved. Never would have generated all this on my own. So much learning for me.

Also nice to blog about my classroom again!
Posted by Alex Overwijk at 7:44 AM No comments: Links to this post